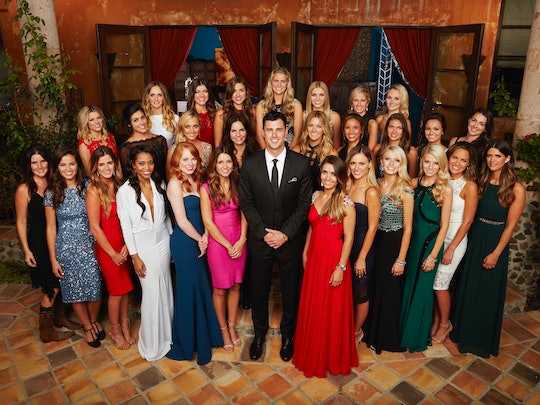 Believe it or not, season 20 of the reality dating show-turned guilty pleasure, The Bachelor, came back Monday night. Once again, 28 women will be vying for the love of one man, looking for their "happily ever after" in what is arguably one of the worst possible places — reality TV. This year, in addition to having identical twins, a war vet and a chicken enthusiast, there are four Laurens on The Bachelor, almost guaranteeing at least a few (or, if we're lucky, many) moments of confusion and hilarity. Who are The Bachelor's four Laurens? Thankfully, they don't look very similar.

All of the Laurens — Lauren Barr, or "LB," Lauren H., Lauren R., and Lauren Bushnell — are different from one another, obviously, and none of them look particularly alike. That probably won't keep this year's lucky Bachelor and past The Bachelorette castoff, Ben Higgins, from mixing up names and/or calling the wrong Lauren, um, Lauren, though. And unless he plans on pulling a "Michael Scott" and marks each Lauren with a permanent marker in some sort of distinguishable manner, there are going to be many awkward situations when Ben calls for one Lauren when he really means the other Lauren. Or maybe the other, other Lauren. Or the other, other, other Lauren. (This is already getting confusing, you guys.)

Here's a closer look at all four Laurens, who are sure to provide viewers with long, drawn-out and overly dramatic Rose ceremonies when Ben pauses between "Lauren" and their defining last names.

LB is a fashion buyer from Stillwater, Oklahoma, according to her ABC biography. LB is quickly becoming a fan favorite, mostly due to her honest-yet-witty answers to the show's questionnaire. She answered the question, "What is your most embarrassing moment" with, "Seeing a doctor for constipation in Germany. My ex had to translate every detail!"

Bushnell is a flight attendant from Marina Del Ray, California. She claimed that coming on the show is the most outrageous thing she's ever done, and her "guilty pleasure" is drinking mimosas with brunch, according to ABC. Jeez, live a little, Lauren.

Lauren H. is a kindergarten teacher from Ann Arbor, Michigan. She listed Legally Blonde as one of her favorite movies (really?) and admitted that her Pinterest is filled with "a bunch of wedding stuff," even though she doesn't have a boyfriend, according to ABC.

Lauren R. is also a teacher, although she teaches math and is from Houston, Texas. In her ABC biography, she said if she could have lunch with any three people, dead or alive, she would pick Jesus, Michelangelo, and Justin Timberlake, which is quite the trio. She also shared a rather romantic story about a painting a past boyfriend gave her: she said he had spent over 80 hours making for her. She wrote it down as the "most romantic gift she had ever received," and, I can't lie, it was great to see a genuine answer where time and effort were praised instead of carat or price tag size.

The four Laurens are sure to provide intrigue, drama, and confusion this season.