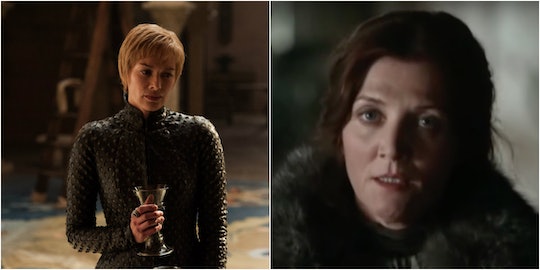 Why There Are Almost No Moms Left On 'Game Of Thrones'

In Westeros, the fictional continent in HBO’s Game of Thrones, having any kind of a conscience seems to be a liability. But in the universe of Game of Thrones, no one seems better poised for punishment than a devoted mother — especially if she aspires to power. (Warning: the following contains spoilers for Game of Thrones.)

From Catelyn Stark to Cersei Lannister to Ellaria Sand, mothers with power are regularly punished on Game of Thrones: on the show, just as in the real world, a woman can either be a mother or a woman with power, but it's difficult, if not impossible, to be both.

On Game of Thrones, maternal instinct is almost always treated as poor judgment — and poor judgment knocks you out of the game. The primary (and perhaps most obvious) example of this is Catelyn Stark (Michelle Fairley), the matriarch of House Stark. From the beginning, Catelyn is painted as an ideal mother: devoted, nurturing, a real family-first type. Yet these are the very qualities that pretty much ruin it for the Starks in the second season.

In the midst of war, Catelyn releases the North’s most valuable hostage, Jaime Lannister, in exchange for her two daughters Arya and Sansa, who she believes are still being held at King’s Landing. (Sansa is, but Arya is not.) This decision goes expressly against her son Robb’s wishes and makes about zero tactical sense, but hey, the lady has a heart.

In an effort to save her children, Catelyn ironically sets them up to be slaughtered.

Alas, heart doesn’t go a long way in Westeros. Robb is infuriated that his mother has made an important decision behind his back and commands she be kept under watch. There goes her powerful role as his advisor. Jaime keeps Sansa at King’s Landing, and then the Lannisters conspire with the Freys to kill Robb’s army — and his pregnant wife — at the infamous Red Wedding.

In an effort to save her children, Catelyn ironically sets the next generation up to be slaughtered. As she too perishes in a fantastic spray of blood, the message is clear: in the cruel world of Westeros, maternal love is a weakness and not a strength, at least on the battlefield.

Perhaps no one is more delighted by the outcome of the Red Wedding than Cersei Lannister. Although Cersei never cuts the kind of round-eyed, angelic figure of a Catelyn Stark, she is just as fiercely devoted to her three children (emphasis on "fierce"). She indulges her psychopathic son King Joffrey, demands her daughter Myrcella back from the Dornish at the risk of any peace with Dorne, and bickers with her daughter-in-law Queen Margaery, the woman who vies with son Tommen for her affection. Unfortunately, the actions she takes to protect her children end up leading to their deaths, fulfilling an omen she received when she was a young girl.

Cersei’s love for her children is often viewed by GOT fans as her only humanizing quality, but their deaths turn out to be a necessary prelude to her own ascent to the iron throne. With less to lose than ever, and no pesky offspring to cloud her decision-making, she can afford to be absolutely ruthless.

“Whoever wins could launch a dynasty that lasts a thousand years,” she tells Jaime. He counters with, “A dynasty for whom? Our children are dead.” Cersei then says, chillingly, “A dynasty for us, then.”

By contrast, Ellaria Sand comes from no dynasty to speak of, but at least until Sunday night’s episode, she was a force to be reckoned with. Herself a bastard (“Sand” is to the south what “Snow” is to the north), Ellaria gains power in the first place by bearing Oberyn Martell’s children. Her daughter Tyene is one of the three Sand Snakes that we saw in Season 7, episode 2, and in a role reversal, it is she who goes to great lengths to protect her mother. (“Mama, mama, mama,” one of her half-sisters had mocked her earlier, before Euron Greyjoy’s attack.)

In some ways, the brutal universe of Westeros is holding up a mirror to our society's own tendencies to demonize or punish women who aim to "have it all."

But Tyene’s efforts are for naught. Just before she and her mother are carried off to capture, when Ellaria begs Euron’s soldier just to kill her and be done with it, the look in his eyes tells us that there is worse punishment than death to come. We’ll see how this plays out, but having two hostages’ mutual love to play against each other is nothing but a benefit for the bad guys, indicating that things will likely not work out in Ellaria's favor.

Of course, there is one prominent and powerful mother on Game of Thrones: Daenarys Targaryen, a.k.a. the Mother of Dragons, who lost her pregnancy in the first season, only to magically give birth to three dragons, her metaphorical children. But even Daenarys's pseudo-parentage of her dragons has affected her skills as a leader: when Drogon started torching families and livestock in Mereen, her love for him initially prevented her from chaining him up, even though she knew that as a ruler, it was the right thing to do.

Ever since Ned Stark got his head chopped off in Season 1, viewers have learned that Westeros is not a universe that rewards honor and altruism. But mothers (particularly mothers who aspire to be anything beyond a mother) seem to be particularly vulnerable in Westeros. That could be part and parcel with the show's oft-criticized tendency to glorify violence against women in general, or because the show's producers personally have a bone to pick with ambitious working women. But it's more likely that the brutal universe of Westeros is holding up a mirror to our society's own tendencies to demonize or punish women who aim to "have it all" — i.e., a career and motherhood.

For mothers who work, or who aspire to have any kind of voice or power in a world that in some ways seems more Westerosian by the day, the fate of these women are an ominous reminder that putting your children first can be a dangerous proposition.

Viewers don’t revel in the suffering of Catelyn or Ellaria Sand; instead, we see ourselves in it. Whether we are conscious of it or not, the choice between having children and having power, or the anxiety over being perceived as more vulnerable as the result of being a mother, is one that we deal with on a daily basis. (How many times has a working mother had to ask herself if leaving the office early because her kid is sick would make her look bad?) In a world that can seem more Westerosian by the day — cutthroat, nihilistic, or plain old-fashioned patriarchal — the fate of these fictional women are an ominous reminder that even in 2017, being a mother and having any sort of ambition can be a dangerous proposition.

More Like This
Festive Mommy & Me Holiday Nail Ideas To Try
The “Tripledemic” Is Scary, But I Feel Less Helpless When I Wear A Mask
101 Advent Calendar Activities, From Books To Read To Cookies To Bake
The 4 Main Parenting Styles & Which Is Best For Kids