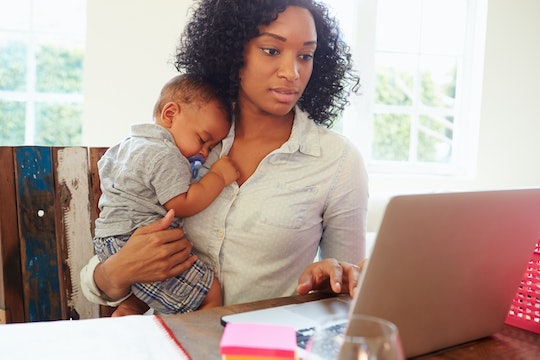 Single Moms Are Quietly Being Pushed Out Of Colleges, & Here's Why

College is not for everyone. But for people who really want to advance in certain careers, or those who are simply eager to continue an education, college can be an excellent option. As it turns out, single mothers are taking advantage of that option more and more. There are more single moms in college than ever before, according to a report published on Wednesday by the Institute for Women’s Policy Research. However, they face unique and significant challenges when it comes to completing those studies, and evidence shows they need more support to achieve their educational goals while also balancing other responsibilities.

There are reportedly 2.1 million single moms in college, a number that’s more than doubled from 1999 to 2012, according to MarketWatch. That's a seriously impressive number, and an achievement that society should be celebrating. But instead of praise and support, those moms face stressful obstacles on the path to graduation, according to the IWPR. Obstacles that range from the financial to the ever-present work-life balance question.

Plus, this is an issue that disproportionately impacts women of color. For example, nearly 2 in 5 black women (or 37 percent) are raising a child or children "without the support of a spouse or partner while in college," according to the IWPR. And 27 percent of American Indian/Alaska Native women and 19 percent of Hispanic women are doing the same. These women are putting the work in to better their lives and the lives of their families — but aren't getting the support they need to reach that goal.

The largest share of single mothers is enrolled at community college institutions, according to the IWPR. Forty-four percent of all single student mothers go to public two-year institutions, which in many cases can be a more affordable option, or a great first step to take when someone is trying to figure out exactly what they want to pursue in their studies.

An additional 30 percent of single mother students attend for-profit institutions. That makes them more than three times as likely to attend for-profit colleges as women students who do not have children. That's a little worrying, since for-profit schools have come under scrutiny in recent years, partly as a result of their role in helping to increase the level of student debt in the United States, according to VICE News.

That debt is especially troubling when you consider that single mothers in school face "major financial challenges" that can keep them from completing their degree, according to the Institute. A large majority of single mothers in college have low incomes — a whopping 89 percent, in fact. And 63 percent live at or below 100 percent of the federal poverty level, according to the IWPR. College is already expensive if you don't have children, but when you factor in the costs of diapers, child care, and food for another mouth (or more), the costs become truly prohibitive.

Other challenges single mothers face that can delay or prevent them from earning a degree include the demands of working full- or part-time, the high cost of daycare (and low availability of the service on campuses), and housing, according to The Hechinger Report, which covers inequality and innovation in education. And, obviously, the time needed to care for their children can pose a challenge to single mothers in college as well. Forty-three percent of women at two-year colleges who live with dependents said they were likely or very likely to drop out of school because of their dependent care obligations, according to the IWPR.

So moms aren't leaving college solely as the result of financial concerns — there are a lot of other issues they contend with as well. If they have to work, they have less time for homework outside of school. If they can't afford pricey childcare options, their ability to attend class and meet the demands of their coursework might suffer if they can't find adequate care for their kids. The deck is seemingly stacked against them.

But when more single moms do succeed at receiving their degrees, everyone benefits. College graduates are more likely than those without college degrees to be employed full time, according to Forbes. And because women with degrees generally earn more over their lifetimes than those without, helping more women, and single moms in particular, earn those degrees could lead to greater financial security for more families.

So how can we improve not just the number of single mothers going to college, but the rate of those moms graduating with degrees? Offering better child care options and child-friendly spaces on campuses, as well as targeted peer support and tailored scholarships are a great start. Offering better financial aid in general would probably be helpful too.

It's a very good sign that so many single moms are pursuing higher education and earn a college degree — it's what we tell people to do in order to maximize their financial success. But they need to have access to the right tools to succeed in that endeavor.