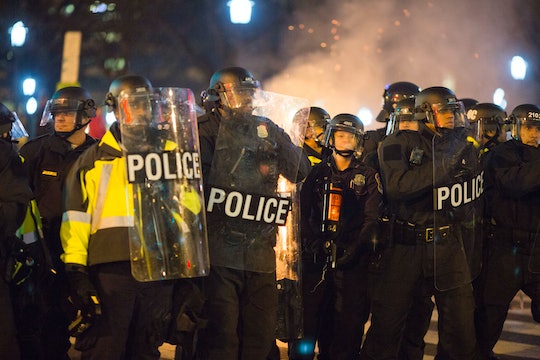 There Are Nazis At Trump's Inauguration

On Friday, shortly after President Donald Trump took his oath of office to become the 45th President of the United States, unrest behind the scenes was taking place. While protestors descended to downtown Washington D.C. to express their distaste for the newest president, a video began circulating around Twitter of reported neo-Nazi Richard Spencer being punched in the face by a protestor. This video shows one thing — that there are Nazis at Trump's inauguration and it is absolutely terrifying to know that.

Spencer was talking to reporters on the side of the road in D.C. when he was punched in the head by an anonymous protestor. Before anything more is said, it should be noted — giving someone, like Spencer, a platform (or any politician that emboldens Nazis) is not okay and that violence in any form is unacceptable. What ensues in the video shows a terrifying scene playing out in the nation's capital this weekend — that alleged Nazis are in D.C. and being given a platform to speak — even if it is on the streets on D.C. The violence that takes place in the clip — even if it is against an alleged Nazi — is absolutely unacceptable. Trump's administration did not respond to Romper's request for comment.

In the video, Spencer is seen talking about the protesting going on behind him. A person to the side of the camera asks him if he is a nazi (which he denies) and makes other claims. When someone asks about his pin — which is a pin of Pepe the Frog, a cartoon that has become a reported symbol of hate — a protestor reaches across and punches Spencer in the face. Shortly after being punched, Spencer took to Twitter to address the incident, letting everyone know that he was okay and could "take a punch." Yes, the violence was disturbing on many levels — but what is even scarier is that Spencer is in D.C. for the inauguration.

For those unfamiliar with Spencer, he is credited as the person who came up with the term "alt-right," according to NPR. According to The Daily Dot, the alt-right is just a rebranding of white nationalism and neo-Nazism. Spencer is known for his support of Trump — after a video of him "leading a group of supporters in a Nazi-esque salute "to say "Hail Trump" — was leaked online. Trump has said little of their support, denouncing the general support of white supremacist groups in The New York Times, saying: "I condemn them. I disavow and I condemn...I don't want to energize the group and I disavow the group." But other than that, according to Business Insider, Trump has not said much else about the group. Spencer, on the other hand, is a known Trump supporter.