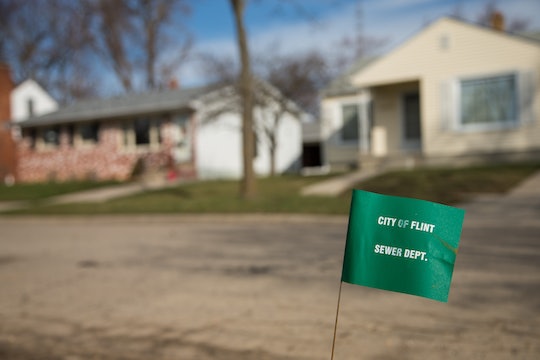 For decades, childhood lead exposure has been blamed for a variety of negative consequences, but a new study might have just disproved one of the most concerning ones: the suggested link between childhood lead exposure and criminal behavior could be completely coincidental, according to a report in JAMA Pediatrics. That's not to imply that lead is OK, of course, but for kids who have already been exposed, it's reassuring to know that they're not destined for a life of crime.

The Centers for Disease Control have reported that approximately half a million U.S. children between ages 1 and 5 have blood lead levels above 5 micrograms per deciliter, the threshold at which public health actions are recommended. High levels of lead exposure can lead to slowed growth and development, hearing and speech problems, brain damage, and learning and behavior problems, which the CDC blames for an increased risk of "juvenile delinquency and criminal behavior." But if I can be your nerdy friend for a moment, allow me to remind you that correlation does not equal causation. That means that just because the incidence of swimming pool drownings roughly coincide with the frequency of Nicolas Cage films (no, really, they do), it doesn't mean they're at all related.

The "lead-crime hypothesis" posits that childhood lead exposure causes learning disabilities, ADHD, and impulse control problems, which in turn causes kids to commit crimes — particularly violent crimes — as adults, according to the Brookings Institution. Populations with kids who grew up drinking water carried in lead pipes have higher homicide rates, and those who grew up close to busy roads surrounded by lead-contaminated soil are more likely to be incarcerated as juveniles. Crime rates fell about 20 years after lead was removed from gasoline, which some point to as proof of the link.

A graph illustrating the amount of lead in Chicago's air coupled with the incidence of aggravated assault in the city seems to imply a clear pattern of children exposed to lead growing up to commit crimes 20 years later. And maps of lead poisoning rates among young children in poor neighborhoods "looks very similar to a map of aggravated assault rates in 2012, when those kids were 17 to 22 years old," according to the Chicago Tribune. But the fact that both lead poisoning and higher crime rates happened in poor neighborhoods shouldn't be ignored.

The new study, carried out by Duke University researchers, notes that low socioeconomic status is "a factor in both lead exposure and criminal offending," and aimed to "disentangle" the coexisting conditions in order to ascertain if they were, indeed, directly connected. It's thought to be the first study of childhood blood lead level (BLL) and criminal offending in which childhood lead exposure was not linked to socioeconomic status. Observation of 553 New Zealanders over nearly 40 years "failed to support a consistent dose-response association between BLL and criminal offending, measured through official reports and self-reports, from adolescence to adulthood." It concludes lead exposure's disproportionate effect on the disadvantaged may have lead to previous studies linking it to crime.

Every step taken to reduce childhood lead exposure is important, but it's only one of the many negative consequences of poverty, all of which need to be remedied. Rather than writing off kids exposed to lead as future criminals, they should be given every opportunity to reach their full potential, and perhaps that starts with addressing poverty at its root. More research needs to be done, but the Duke researchers urge that future responses to lead exposure "should focus on health consequences, not potential criminal consequences." It's hard to argue with that.