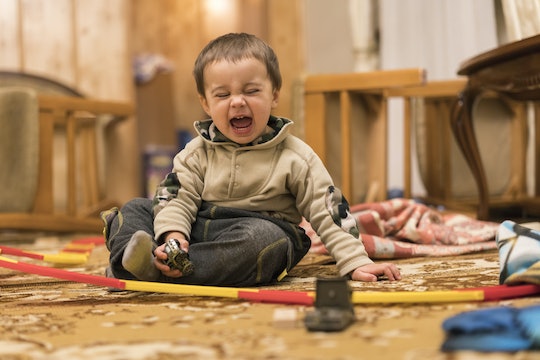 The first time my 2-year-old son threw a pair of slippers in my face, I cried. “What are you doing? Why are you throwing shoes at me?” He giggled in response. I was terrified: did I teach my son violence? The issue opened a deep scar. I grew up in a violent household, one filled with screaming and physical abuse from my father to my mother and myself through my adolescence. I grew up defiant and determined: no one would ever abuse me and I would never bring that into my family.

Fast forward 20 years, and I found myself in a happy, healthy marriage, creating a stable home structure to raise my son. Then he started throwing food at the walls, chucking toys, and pushing back physically during his diaper changes. I began to wonder where I had gone wrong. I thought I was teaching him healthy interactions, and here I was faced with behavior that I labeled violent.

When I see my son throw something, I blame myself.

These types of behaviors are both normal and frowned upon in our society. It’s common to see kids pull, grab, punch, and exhibit aggressive behavior in public. We call it out, we are alarmed by it, but we are poorly equipped to address the pain or understand where those instincts are coming from. We use time-outs, mom-voice, sticker systems, but I wanted a deeper understanding of how to react to these impulses in children. I reached out for help.

Thankfully, I have a wide circle of child specialists available to me. My brother, Karthik Gunnia, a clinical psychologist who has a private practice in Manhattan, schooled me on the theory of mind, essentially that children don’t know other people have different thoughts, feelings, and perspectives.

Theoretically that made sense, but practically I wanted the situation to change — and fast. When your kid seems to be acting up, you don’t want to just wait for them to age out of it. As parents, we start up the “sorry” road where you take your child aside and wait for them to present an apology to whomever they hurt.

“It’s not about getting your child to say sorry,” Dr. Michelle Graham, a child psychologist, told me. “Sorry is a just a word to them that they may not understand. What’s important is getting them to recognize happiness, anger, sadness and use those words. Developing empathy is the key,” she said.

I took this advice quite literally and started using “happy” and “sad” in my speech, both with my son and with my husband. I began to show my son what my happy face looked like, and how dad may need a hug because he had a hard day and he was sad.

I knew my son understood and empathized with other children: he would often run and point to a crying child and say “crying” and show sadness. Sometimes he would even give them a hug.

But what I realized is there wasn’t always a connection between his actions and others’ feelings (as my brother had pointed out).

I started reinforcing his positive behavior that made me happy (like when he picked up after himself after a meal) to begin showing the connections between his action and my feelings. I started a sticker system for positive behavior, which absolutely helped. As my brother had said, children are driven by rewards and will act in a way that gets them a reward. However, until the theory of mind is developed it’s very hard to expect them to understand how their actions may negatively affect others.

I struggled with this. Moms like us don't want to wait for developmental change — we want to know how we can fix this now. Every time my son sees a spider or even an ant in the doorway, I would make a pointed presentation on how to bring the insect back outside with harm. I even tried to show him how stepping or standing on books can be harmful and disrespectful.

But I learned that his behavior is very normal. “When children haven’t been able to use language to its fullest, it’s developmentally appropriate for them to feel frustrated and show it through their bodies,” Lynetta,* a Montessori preschool teacher, told me. Educators often stress the role the redirect can have. Essentially, the idea is if a child is frustrated that they can’t use a specific toy, the parent or teacher can redirect them. “You can see Julie is using that toy right now. Why don’t we find you a different toy, and then you can maybe play with this one later?”

Our job as parents isn’t necessarily to minimize our own discomfort at our children’s feelings, but to be attuned to them and find a way for them to express their emotions.

When is this behavior a concern? Many psychotherapists agree it has to do with context. “When the behavior is excessive and consistent, it could be a concern.” Gunnia tells me. “Ultimately violent behavior goes beyond just hurting other kids, to hurting animals or destroying property.”

So my son was not violent. But that didn’t leave me at ease. As a Buddhist practitioner, I turned to Heather Coleman, a mindfulness-based psychologist, for help. “It's easy to feel overwhelmed as a parent when faced with a toddler's roller-coaster emotions throughout the day,” she told me. Coleman explained that our job as parents isn’t necessarily to minimize our own discomfort at our children’s feelings, but to be attuned to them and find a way for them to express their emotions. It’s similar to how we want to be with our emotions, she said, “holding them openly with care and flexibility.”

This felt right to me, and I tapped into the philosophy of mindfulness as a resource. I wanted my son to know it was OK to feel sad, or even frustrated. When he doesn’t get a second sticker, or a cookie before dinner, and begins crying, I hold him and tell him, “It’s OK to feel frustrated. I know this is hard. But you’ll be OK.” Acknowledging his feelings has gone a long way for him to slowly work through them.

The situation is of course gets trickier in public. Your child is always your responsibility. It’s very hard for a parent, especially for a mother, not to feel responsible for their child’s behavior. To complicate matters more, progressive moms want to encourage and manage behavior without aggressive directing. We know that when a child does not behave well, the teacher or stranger walking past you on the street is not thinking “That child is terrible,” but rather “that mom must not be doing something right.” Or maybe I just feel that way. All the time.

I internalize this pressure, and it quickly leads to guilt. When I see my son throw something, I blame myself through the whole range of the spectrum, from getting down on myself about being distracted earlier that day, to wondering if I should have been more strict with him the day before. I always feel I could have done better.

I recently took my son to a school field trip to a science museum. I should have realized earlier that the field trip was just parents (no teachers propping us up) and predominantly for older kids. Instead, I found myself stuck trying to convince my son not to eat ketchup (he discovered it for the first time) for lunch, and trying to lure him out of corners of the building where he laid on the floor refusing to move. The situation is not unusual for many parents, but having to experience that around other parents in my community was incredibly stressful. I tried to be the most calm parent while trying to fight my squealing son into the stroller an hour past his nap to get home.

It was after coming home to a nice bottle of Pinot Noir and googling “what should you do about your child having a tantrum in public,” that I realized that no matter where you are, and how difficult your child is behaving, it’s ultimately only about you and your child. Focusing on my son, without feeling the social pressure around me, is my only way forward.

My brother helped to normalize the pressure. “We are primed as humans to think about how others are viewing us; it's the basis for relationships and can be healthy in moderation,” he tells me, explaining that the Instagram-driven world leads us to worry more about how things look to others. “It's especially easy to fall into this trap as parents, given the magnitude of the stakes (impacting how children develop) and the lack of control over the situation. Even though we feel responsible for the actions of our children, they are separate entities and there are limitations to how much we can influence them.”

Easier said than done! Sandra DiPillo Twig, Clinical Social Worker, told me, “There is no such thing as a perfect mother, we all make mistakes and will continue to. Children don't need parents to be perfect. They learn from how we respond to our own mistakes. By modeling compassion with our own mistakes we can give them room to be their own beautifully imperfect human selves too."

Seeing my little munchkin as an entirely separate person feels hard. This was the same being who was living inside me for nine months. But I’m starting to realize that the process of helping him become his own person, with his own emotions and words, will make us even more connected. Put simply, you have to suspend your own anxieties about your kid's behavior, and empathize.

Recently, while we were playing a basketball game in the bathtub with rubber ducks, I missed the basket repeatedly. Frustrated with my weak throw, I told him, “Mom isn’t very good at this game,” and handed him the duck.

He gently gave it back to me and shook his head. “Try again,” he said, giving me a hug and then sitting in my lap patiently waiting for me to score a basket.

*Lynette asked to withhold her surname because she is not authorized to speak on behalf of her workplace.

More Like This
I'm Having A Slow Lazy Summer For the First Time In 20 Years & It’s All Thanks To My Son
I’m A Newly Single Mom. How Do I Get Over My Body Insecurity?
Everything Parents Need To Know About Monkeypox
24 Amazing Harry Potter Costumes For Fans Of All Ages