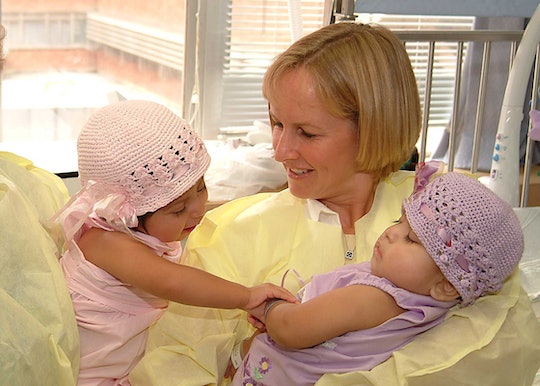 Twin babies aren't always an identical, matching pair. Oftentimes, there is a visible size difference between the two. Now, new research shows that there may be a scientific reason why one twin tends to be smaller than the other — and it has to do with the placenta.

Research coming out of Boston Children's Hospital shows that twins don't always develop their placentas at the same time. Researchers observed fetal development in pregnancies involving identical twins to determine how this works. Twins initially share a placenta that is then split into two separate compartments, one for each baby. The splitting process is what researchers believe causes the difference.

Previous studies have shown that when oxygen is transported through the placenta from a mother to her baby at a slower rate, it can lead to slower fetal growth. In the case of identical twins, if one twin is receiving placental oxygen at a slower rate than the other, it can create a difference in size.

In order to gain an understanding of how oxygen delivered via placenta impacts growth rates, researchers performed MRIs on women who were between 29 and 34 weeks along in their gestation. Researchers then performed what they called "real-time placental oxygen mapping."

The women involved in the study were asked to inhale pure oxygen, then researchers observed how much time passed before the oxygen reached maximum concentration within the placenta and moved through the umbilical cord, finally reaching the fetus.

The data gained from these procedures was then cross-referenced against the babies' birth weight records. Researchers found that slower movement of oxygen through the placenta appeared to be associated with lower birth weight.

It is believed that this information has implications not only for mothers of identical twins, but anyone at risk of placental dysfunction. If the causes of low birth weight are determined, the condition could potentially be tested for and prevented. One of the researchers involved in the study, P. Ellen Grant, MD, discussed the future of this research in the hospital's release:

Our next goal is to figure out what causes variation in oxygen transport in the placenta and identify a cutoff value that would be of concern in a pregnancy. Then, we can think about potential treatments to improve placental oxygen transport, and use our methods to immediately assess the success of these treatments.

While placental oxygen delivery is not an issue that mothers can control, these findings shed some light on the process and are a step toward limiting risks for both mothers and babies.