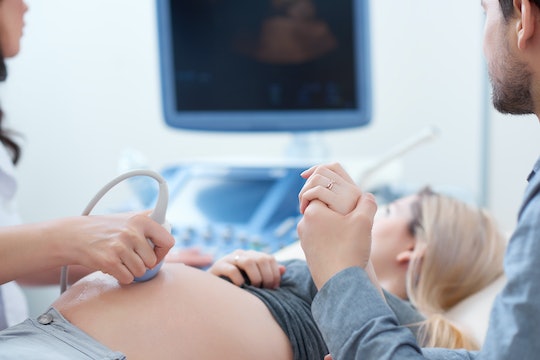 There Might Finally Be A Blood Test For Preeclampsia, & It Could Be Life-Saving

Preeclampsia, a condition that affects 5 to 8 percent of expectant mothers, is one of the more concerning risks that comes with pregnancy. Often difficult to detect and with potentially devastating results, this condition is one that is best caught early. Unfortunately, early screening technology isn't readily available — perhaps until now. This new blood test for preeclampsia could be a literal life-saver for moms at risk.

A recent trial held at Melbourne's Royal Women's Hospital in Australia tested the blood of women who showed potential symptoms of preeclampsia, such as high blood pressure, headaches, and nausea. Researchers looked for two proteins in the blood, both of which are released by the placenta. The tests proved to be 99 percent accurate in predicting the condition in the women within the following week after receiving the test and 95 percent accurate over the next month after receiving the test, according to The Bump.

Overall, preeclampsia is tricky to detect. Current screening, which involves urine tests for proteins, hinges on the presence of known symptoms — such as high blood pressure, excessive swelling, vision changes, and intense abdominal pain — which often don't arise until late in gestation, according to The Mayo Clinic. Early detection could be the key to helping women avoid the risks, which can be severe. Preeclampsia can cause the placenta to cut off the oxygen and nutrient supply to the baby, potentially leading to an early induction or organ damage.

Professor Shaun Brennecke, the Royal Women’s Hospital director of pregnancy research, explained according to Sydney Now Magazine that women are often already suffering by the time their condition is detected:

In the past we've had to wait until preeclampsia was clinically obvious by which time mothers were often quite sick. If a test is positive we can increase our vigilance and surveillance and we can also be in a position, being forewarned and therefore forearmed, to start medications that can improve the outcome for both mother and baby.

Brennecke didn't share just how early the hospital administered its tests to the participants, but his team's efforts could allow doctors to treat the condition before mothers are experiencing extreme symptoms and in need of medical care.

Brennecke also told Syndey Now Magazine that theirs is "the best available predictive test for telling who will and who will not develop preeclampsia during the latter stages of pregnancy." He went on to explain that preeclampsia remains a serious risk for many women:

Pre-eclampsia's been around throughout human history and even today around the world it's one of the major causes of death and disability of mothers and babies in relation to pregnancy.

Some women are at a higher risk of preeclampsia than others; particularly those who have had it in the past, have had multiple pregnancies, have a history of chronic high blood pressure, diabetes, kidney disease or organ transplant, have a family history of preeclampsia, and those who are over 40 or under 18 year old, according to the Preeclampsia Foundation. If you are experiencing symptoms and or fall under one of these categories, speak with your doctor.

Although it can be dangerous and frightening, preeclampsia can be treated. In mild cases, it is often treated with bed rest, reduced salt intake, increased water consumption, and regular check-ups, as reported by Healthline. In more extreme cases, high blood pressure medications are prescribed for the duration of pregnancy and moms may be induced to avoid further damage. Innovations in prenatal medicine, such as the new blood test for preeclampsia, are an important part of keeping moms and babies happy and healthy.