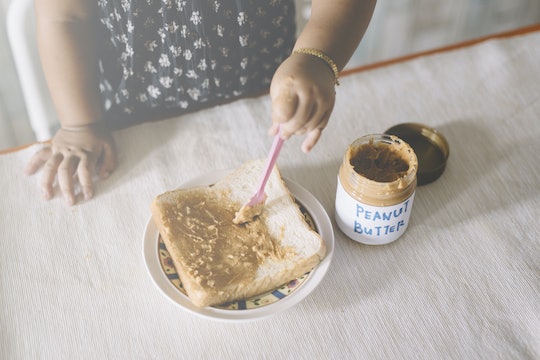 Research presented at the American College of Allergy, Asthma and Immunology (ACAAI) Annual Scientific Meeting in 2017 indicated that peanut allergies in children had increased 21 percent since 2010 — and that nearly 2.5 percent of children in the U.S. may have an allergy to peanuts, according to Science Daily. Peanuts are the most common cause of fatal, food-induced anaphylaxis or severe allergic reaction, so it's nothing to brush off. Dr. Ruchi Gupta, lead author of the 2017 study, recommended that after assessing risk with a pediatrician or allergist, parents should introduce their children to peanut products in infancy to prevent potential peanut allergies later in life.

"Guidelines to walk parents through the process of introducing peanut-containing foods to infants who are at high, medium, and low risk for developing peanut allergies were established in January 2017," states the ACAAI website. But while preventative measures are widely discussed, diagnosing food allergies has not always been a simple feat. Until now.

The study, published in the Journal of Allergy and Clinical Immunology, examined 174 children, aged from 6 months to 17 years old and 73 of whom were allergic to peanuts, and found that the worst-affected patients had the most activated mast cells, which contribute to the triggering of allergic symptoms like skin reactions and constricted airways, the BBC reported.

Traditionally, allergists are trained to administer allergy testing with skin pricks or they conduct food challenges by feeding patients larger doses of peanut incrementally in controlled hospital settings, which can sometimes trigger anaphylactic shock, according to the American Academy of Allergy, Asthma & Immunology. Blood tests have also been used for decades, but they often produce false positives because they look for antibodies and can't differentiate between sensitivity and true food allergy, according to the Reuters. This new blood test, however, promises to change the game for the peanut allergy with 98 percent specificity, researchers from the Medical Research Council (MARC) reported, according to Reuters. That means less risk and more reliability.

Dr. Alexandra Santos, an MRC scientist and pediatric allergist at King’s College London, led the research, and shared that this new test will save both money and stress, Reuters reported.

"The technology has evolved — now we have better ways to look at immune cells and to see how they respond," Santos said, according to Reuters.

The team is currently discussing plans for a widespread rollout of the test and adaptations to other foods that often cause allergies, like milk, eggs, and tree nuts, Reuters reported.

Peanuts, milk, eggs, and tree nuts are part of the eight common allergens that account for 90 percent of all reactions in kids (also including soy, wheat, fish, and shellfish), according to Kids Health. Having one cost-effective, efficient, and reliable blood test that could comprehensively test for all of these food allergies will have a seriously positive impact on children's health.