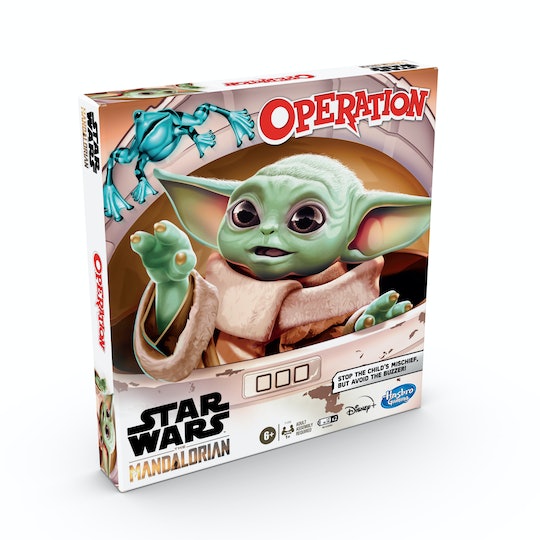 There's A 'Baby Yoda' Operation Game But Don't Worry, No One Is Taking Out His Wishbone

With the bananas popularity of Disney's The Mandalorian, all things "Baby Yoda" are so in right now. Classic game-maker Hasbro has jumped on board with a "Baby Yoda" Operation game that fans will want to get their steady hands on as soon as it's available.

It sounds creepy, but bear with me. Players will not in any way be operating on "The Child" in this game, officially called Operation: Star Wars The Mandalorian Edition. Hasbro knows there's no way we could gut the cutest alien in all of sci-fi pop culture. Instead, players will seek out all the tokens the sticky-fingered, 50-years-young toddler has confiscated. Just like in the traditional Operation game, players will use tweezers to retrieve the items, attempting to pull them out without hitting the metal sensors on the perimeter and setting off the alarm. It retails for just $20, so I'm confident it will sell out really quickly as soon as it's available – which will be this spring on Amazon and Walmart.

I am equally as confident that I will buy this and lose every single game I play at home. After all, I live in a house full of Cheater McCheaterpants who will bump my elbow, tilt the game board, or hit the edge of the table to foil my attempts. They simply cannot stand it that I am the very best there ever was and ever will be when it comes to Operation. Fun fact: I actually played against a friend of mine who is a neurosurgeon and I beat him terribly. Granted, we were at a brewery and I was the designated driver, but I still won. My next goal is to play my brother-in-law, the anesthesiologist, and see if I can take him out after a few (or more) shots of rum. Perhaps we can play the Baby Yoda Operation game while watching The Mandalorian? Seems like a plan.

The game does require two AA batteries, so if you're going to buy this game as a gift, don't pull a rookie move. Make sure that you pick up a pack of batteries or two for the lucky gift recipient. The pieces, like any version of Operation, are definitely a choking hazard, so keep them from little mouths. Other than that, this looks like a heck of a good time to spend with family and friends and, like the show, an instant classic.