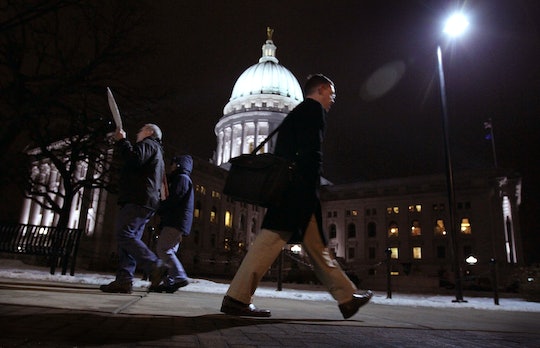 On Monday, the Supreme Court lifted a block on a controversial "fetal protection" law in Wisconsin, meaning that the state can continue enforcing the law while appealing a lower court ruling that had overturned it. But Wisconsin's "Cocaine Mom Law" could end up imprisoning pregnant women and without a doubt threatens pregnant women's rights. Not only that, but there's already a case that proves it. And if the law is allowed to continue, it may not just hurt expectant mothers. It could end up harming the very infants it is designed to protect.

Wisconsin’s 1997 Unborn Child Protection Act gave the state the power to involuntarily detain a pregnant woman who "habitually lacks self-control" when it comes to abusing drugs or alcohol, if the state deems that her substance abuse could pose a "substantial risk" to the baby she is carrying. The loosely-defined law allows courts to appoint lawyers to represent the fetus against its mother, and if pregnant women who have a history of drug use do not enter treatment, the state can send them to jail. This can apply to women at any stage of their pregnancy.

It seems that the law has already lead to the mistreatment of pregnant women. Just look at the case of Tamara Loertscher, who sued state officials after being involuntarily detained under the law.

Back in 2014, Loertscher sought care at a Wisconsin hospital, suspecting that she might be pregnant, according to Rewire. She had been self-medicating a thyroid condition and her depression with methamphetamine and marijuana, but said that she stopped when she thought she might be pregnant. She allegedly told all this to hospital staff, who confirmed that she was 14 weeks pregnant, and then reported her to social services. Her fetus got a court-appointed guardian, but Loertscher was reportedly denied legal counsel. In short order, according to Mother Jones, Loertscher was jailed for nearly three weeks, and even put in solitary confinement for a few days. During this time, she reportedly received no prenatal care, and no care for her thyroid condition. In addition, according to her lawyers, she was allegedly threatened with a Taser.

Loerscher, who later agreed to weekly drug testing and gave birth to a healthy baby boy, won her case in the district court, which deemed the law unconstitutional. Now the state is appealing, and even if the ban holds, many more women could have their constitutional rights taken away in the meantime, thanks to Monday's court ruling.

The "fetal protection" law could also end up harming babies. Some pregnant women who have used or are using drugs may be so scared by the law that they won't get prenatal care, or won't disclose all the necessary information to their health care providers. As Milwaukee's Health Department said when the law was first put into place,

A criminal justice approach to maternal and child health is not the best alternative. Readily available drug and alcohol treatment for expectant mothers would be preferable to threatening mothers with incarceration.

This Wisconsin law continues the erosion of women's rights, and might end up hurting babies in the process. Hopefully, judges will take this into account during the appeal.