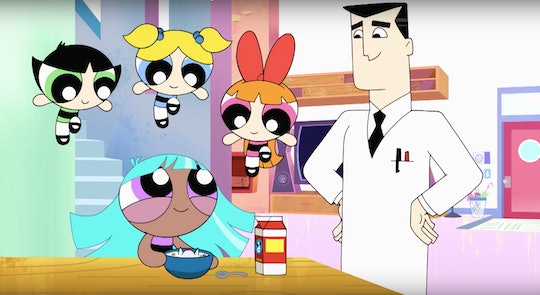 Sugar, spice, everything nice, and (of course) Chemical X brought Blossom, Bubbles, and Buttercup to life. The crimefighting sisters started protecting the city of Townsville in 1998, but their last season ended in 2005. That is, until the Powerpuff Girls reboot brought them back onto Cartoon Network in 2016. This Sunday, a five-part TV movie event revealed that there's a new Powerpuff Girl named Bliss (which is short for Blisstina), and her presence is definitely needed. She's got that trademark toughness but brings a new, mature perspective to the team. Honestly, she might be your kid's new role model for a pretty awesome reason.

With bright aqua hair, a lilac-colored dress, and a cute, heart-pendent headband, Bliss is the other girls' older sister. Bliss was Professor Utoniom's prior experiment, viewers learned on Sunday. She's got the sugar, the spice, the everything nice, but is also equally composed of Chemical W, and not Chemical X. The Chemical W is her apparent downfall; Bliss has less control of her powers than the others, so that when she gets upset or excited, things tend to go haywire. Still, she can fly and fight just as well as the other three, she just has to take extra caution to keep everything in check. Despite her hiatus away from her family, Bliss is back and ready to crush some super-villains alongside them.

Despite her age and chemical make-up, something else makes Bliss pretty special. Though the TV movie hasn't acknowledged it explicitly in dialogue, Bliss is the first black Powerpuff Girl, as BET reported.

Voiced by South African performer Toya Delazy for the movie's American audience, Bliss is the perfect fourth member. "And just like that, I became a Powerpuff Girl," Delazy tweeted on Sept. 7. "Much love to my @cartoonnetwork for trusting me with this epic job," she wrote, adding the hashtag "#lifegoals."

Praising Delazy's work, Jamie Ondarza, the Senior Vice President at Turner Broadcasting in Southern Europe and Africa, stated that "Toya is definitely a perfect fit as the fourth Powerpuff Girl" because "she is confident, bubbly and quirky, all the values that we are familiar with, love and appreciate." A few other actresses will voice Bliss for the show's release in other countries.

Delazy's voicing of Bliss is valuable for so many reasons. For kids especially, representation in the media is vital to self-confidence. Seeing black, female superheroes shows young women of color that their narratives matter and that their stories are as exciting and fun as the classic cast member's. Though she definitely should have had a spot in the crew in the original series, fans are definitely embracing Bliss' return home.

If you're a die-hard Powerpuff fan, you might be thinking: "But wait, there's already a fourth Powerpuff Girl," and you're not exactly wrong. Fans are (jokingly) pointing out that Bunny was the girls' failed attempt at making a new sis for their squad, and deserves a little reverence. A chemical imbalance and botched experiment unfortunately resulted in Bunny exploding by the end of the episode, and the girls learned not to toy with the Professor's lab again. Technically, then, Bliss is the fifth Powerpuff Girl.

If you're thinking that a call for better representation in kids' TV shows is a silly concern, consider this: it's 2017 and, up until last night, no African-American woman had ever won an Emmy for comedy writing. "The things that make us different, those are our superpowers," reminded Emmy winner Lena Waithe during her acceptance speech.

Who better to put on a cape then a crime-fighting, high-flying, black cartoon super-heroine? The Powerpuff Girls: Power of Four aired its first of five parts on Sunday night, and fans can't wait to see more of the four and get to know Bliss even better.

More Like This
Mariah Carey Says She Has Never Called Herself The “Queen Of Christmas”
Jodie Turner-Smith Opens Up About Being Secretly Married & Pregnant
The Boy, The Mole, The Fox, and the Horse Animated Short Looks Absolutely Gorgeous
Meghan Markle Wore Lilibet On Her Chest As She Fed Chickens At Their California Home