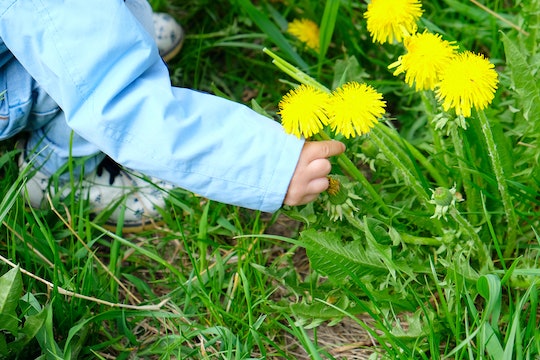 Nature is beautiful — until you come across a plant that can take you out. Come in contact with some poison ivy, and you're cursed with an itchy rash that last for weeks. Same if you take a tumble with a shrub of poison oak. But if you think a super itchy rash that's hard to treat is the worst of it, think again: There's a plant that causes burns and blindness, and here's what parents need to know to keep their kids safe.

The plant in question is Heracleum mantagazzianum — or, what's more commonly referred to as, giant hogweed. The noxious weed produces a toxic sap that, when exposed to sunlight, can cause third-degree burns and blisters, according to Science News. If the clear, watery sap comes into contact with your or your kid's eyes, it could cause permanent blindness.

So what does giant hogweed look like? The invasive plant has large umbrella-shaped white flower clusters, according to Better Home & Gardens. Giant hogweed grows in fields, forests, yards, and roadsides, as well as along streams and rivers. Although it's native to the Southeast Asia region, the plant has been discovered in Virginia, North Carolina, and other areas in the Pacific Northwest and the Northeast, Better Homes & Gardens reported.

Giant hogweed has also been spotted in Michigan, New York, and parts of the Midwest, according to CBS News. Last week, researchers at the Massey Herbarium at Virginia Tech identified giant hogweed in Clarke County, Virginia, where they say about 30 plants have sprouted in the area, CBS News reported.

The Virginia Tech team took to its Facebook page to urge people who believe they've come across giant hogweed to report it — and to not touch it under any circumstance, according to CBS News. The researchers also included different images of giant hogweed, which has flowers that stretch up to two feet across, with their Facebook post to help people better identify the invasive plant.

City officials have also started to take to social media to warn residents about the invasive, noxious plant. The fire department for Arlington, Virginia wrote on its Twitter account on June 18:

As summer heats up and hikers are taking to the trails, please be aware of this poisonous plant that can cause 3rd degree burns. It has been spotted in VA. There are no known Giant Hogweed plants in Arlington, but if you come across a plant that looks similar, do not touch it.

In other words: Run for your dear life.

But in all seriousness, giant hogweed is a dangerous plant. In fact, Officials for Isle of Wight County, Virginia wrote on the county's Facebook page that "giant hogweed makes poison ivy look like a walk in the park," according to Better Homes & Gardens.

Parents, if you believe you've spotted giant hogweed, report it to your local authorities right away. If you or your kids happened to touch the noxious plant, immediately wash that part of the skin with soap and water, then get into contact with your doctor as soon as possible, according to Good Housekeeping. Washing the affected area should minimize the reaction, which should show up in about 15 minutes. You should also see dark, painful blisters form in two days; the scars and skin sensitivity caused by these burns can last for years, Good Housekeeping reported. Your doctor could also prescribe a topical or oral steroid to lessen the severity and speed up recovery.

It's also important that you cover your or your child's skin for the next two days to keep the exposed area out of the sunlight, according to Better Homes & Gardens. If the watery sap gets into your or your kid's eyes, flush immediately with water and wear sunglasses for 48 hours.

Giant hogweed sounds like a nightmare, but with the proper education, parents can help keep their kids safe.