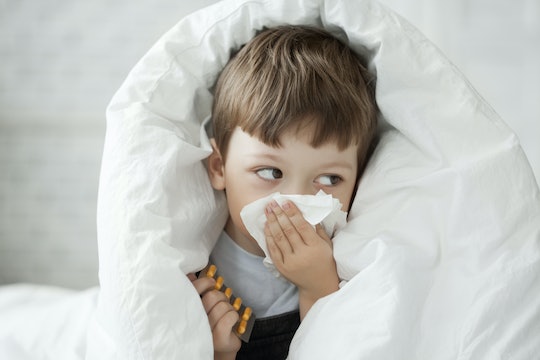 Not only did flu season hit early this time around, it hit hard. During the last week of 2017, influenza activity increased sharply in the United States, according to the Centers for Disease Control and Prevention. There's now a potentially deadly flu outbreak in 46 states, and a particularly dangerous strain of the flu known as N3N2 makes up 83 percent of reported cases. That strain is apparently associated with more hospitalizations and deaths in those over 65 years of age and in young children as compared to other age groups, the Weather Channel reported. Thirteen children have died from the flu nationwide so far this season, but experts say there are things parents can do to help prevent their children from contracting the illness.

What's worse, in some areas like California, hospitals are beginning to run out of Tamiflu, the anti-viral medication used to treat the flu, according to The Weather Channel. But before things even get to the point of a child needing treatment in a hospital, experts say there are ways to try to prevent the spread of the flu so there's less of a chance your kid will catch it this season.

The fact is, the prevalence of the flu has absolutely skyrocketed in some areas of the United States in the past few weeks. In Chicago, there's been more than 100 cases reported since Christmas. Unfortunately, one of those cases was a 10-year-old boy who died from a viral infection that attacked his heart, which is a rare complication of the flu.

Children younger than 5, but especially kids under the age of 2, are at high risk of developing flu-related complications, according to the CDC. Pregnant women and women up to two weeks postpartum, residents of nursing homes or other long-term care facilities, and people with conditions such as asthma or heart disease are also at risk, among others.

So what can parents do to try to stop their kids from getting or spreading the flu? There are actually several recommendations from experts that should help.

The absolute best way to prevent seasonal flu is to get vaccinated every year, the CDC reported. Despite fears that the flu vaccine this year would be largely ineffective, it's still a recommended course of action by health experts.

In fact, one study found that older adults who get the flu vaccine each year have reduced odds of catching a flu strain severe enough to end up in the hospital. Study author Dr. Jesus Castilla said this strengthens the idea that, although getting a flu shot doesn't always prevent the flu, it might make it milder for those who do catch it, according to WebMD.

The CDC also offers a whole list of ways to prevent the spread of germs and the flu. These everyday actions include avoiding close contact with sick people, and limiting contact with others if you yourself are sick. That's a little difficult if you're a parent who has the flu and you're trying to keep your kids from catching it, but thankfully, there are other methods to try to lower your child's chances of picking up the illness.

The CDC also recommends covering your nose and mouth with a tissue when you cough or sneeze, washing your hands often with soap and water, and avoiding touching your eyes, nose and mouth. "Germs spread this way," the agency bluntly reported. People also need to be sure to clean and disinfect surfaces and objects that may be contaminated with germs.

The number of cases of influenza in the U.S. over the past several weeks is certainly something to be concerned about. But there are ways to try to prevent catching it or spreading it, in an attempt to keep those numbers from growing too much more. If you are particularly concerned about the health of your child or their chances of catching the flu or suffering complications from it, talk to their doctor for more information and preventative tips.