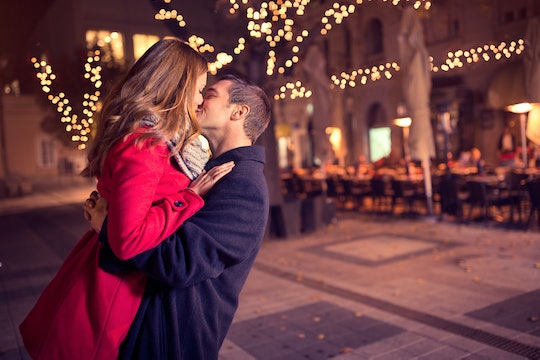 Beyond the mistletoe and spiked eggnog, according to new research, there's apparently a scientific reason as to why people are more interested in sex around Christmas. And, as it turns out, birth rates really do increase nine months later. Seriously, science says so, y'all.

In a new study published in Scientific Reports, aptly titled, "Human Sexual Cycles are Driven by Culture and Match Collective Moods," researchers found that there really is an increase in the amount of sex people have when Christmas rolls around. And then, there's another increase in births a mere nine(ish) months later.

According to The Verge, "Researchers looked at web searches about sex from 2004 to 2010 and 10 percent of public Twitter posts from 2010 to 2014." By looking at the compiled data, the researchers were able to determine that the holidays are a major driving factor of the human libido. According to the study's findings:

Interest in sex peaks sharply online during major cultural and religious celebrations, regardless of hemisphere location. This online interest, when shifted by nine months, corresponds to documented human births, even after adjusting for numerous factors such as language and amount of free time due to holidays.

Basically, if you're feeling particularly randy this holiday season, you aren't alone. It seems as though there's something in the air, and now there's scientific proof of it.

Again, just from going through those sets of data, the researchers were able to determine that people all over the world really started to look up more stuff about sex during major religious holidays, such as Christmas and Ramadan, as well as post about it to Twitter.

In fact, researchers were even able to determine that people's emotions shifted significantly during the holidays, as well. Specifically, per the study, "mood, measured independently on Twitter, contains distinct collective emotions associated with those cultural celebrations." And as most adults are already aware of, so much of sex is associated with emotions, whether you want it to be, or not. Seriously, even if you're not emotionally attached to your sexual partner, there's still a chance that you could have an emotional reaction after intercourse, which could be either positive or negative. It's all normal.

As this most recent study also noted, there's a pretty huge rise in births about nine months after the holidays, namely, Christmas. "In Western, Northern Hemisphere countries, births tend to peak in September, corresponding to early winter conceptions," the study noted.

And really, when you think about it, it all kind of makes sense. For a lot of people, the holiday season is a time of joy and excitement, so combine that with a few days off work and bam, you've got yourself some holiday intercourse. Further, as the New Zealand Herald reports, there's a definite "feel-good factor" associated with this increased holiday sex. But that's not all; as HuffPost notes, people also tend to feel more depressed, emotionally vulnerable, and stressed out during the holidays, which are also factors that lead to an increased amount of sex.

Speaking to The Independent, Luis Rocha, one of the study's co-authors said that, while one hypothesis was that there were biological factors that explained the rise in sexual drive this time of year, that isn't what the results yielded. "Rather, the study found culture — measured through online mood — to be the primary driver behind cyclic sexual and reproductive behaviour in human populations."

So, yes. You're completely correct if you've been thinking that there sure are a lot of September babies out there. And now, science has practically proven that this is because the holiday season is practically nature's gift for people to get it on.