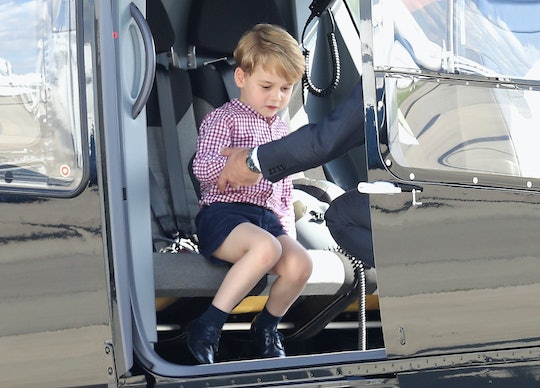 There's A Meaning Behind Prince George's Outfits You Probably Missed

If you're like me, you're probably drained from all of the Affordable Care Act repeal stuff. Sure, the GOP effort has been defeated once again, but the fight's not over yet. But if you need something to take your mind off of the news, here's a strange tidbit for you to mull over. There's a reason Prince George always wears shorts, and it's fascinating.

According to In Style, the 4-year-old royal son's fondness for shorts is a "very deliberate sartorial statement." Turns out, dressing young boys in shorts is a way to signify their nobility, and British aristocrats have been doing so for centuries. His father, Prince William, and his uncle, Prince Harry, also donned shorts in their childhood, according to Harper's Bazaar UK.

Trousers are for older boys and men, whereas shorts on young boys is one of those silent class markers that we have in England. Although times are (slowly) changing, a pair of trousers on a young boy is considered quite middle class – quite suburban. And no self-respecting aristo or royal would want to be considered suburban. Even the Duchess of Cambridge.

That's not all. According to the Daily Mail, where Hanson is a columnist, royal children wear dresses for the first few years of their life to accommodate for potty training. Then they are switched to shorts. The tradition, Hanson explained to the Daily Mail, is called "breeching."

The rule is not new, nor is it probably new to Princess Kate, since she was raised in an upper-middle class family. Still, one can't help but raise an eyebrow at the seemingly sexist undertone of the tradition. Just consider this comment for Hanson, which he made to the Daily Mail,

Not only does The Duchess of Cambridge have to worry about what she is wearing in public, but she has to dress her own children and find a balance between royal tradition and heritage and more proletariat customs, such as the 'suburban' habit of making young boys wear trousers.

To be honest, I was never curious about Prince George's affinity for shorts. But after a week of terrible news that put my health care and the health care of my family at risk, I'm happy to learn this weird tidbit about a royal little dude.