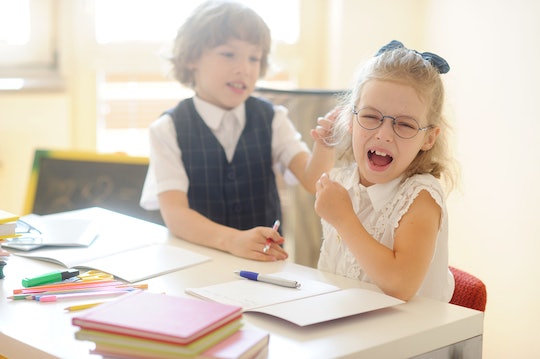 Cliches of little boys cutting off girls' pigtails and pushing them down with the supposed intention of "flirting" have been brought into question in recent years as a part of the rape culture discussion. And while the "boys will be boys" rhetoric may seem innocent, it's actually quite problematic and one mom is telling her child to fight back when she's faced with it. In fact, as she explained in a recent blog post, she told her daughter to kick boys "in the balls" for a very logical and empowering reason.

Mom and blogger Mandi Castle wrote a post titled “Why I Told My Daughter To Kick Your Son In The Balls,” and it has since gone viral. Posted to her blog, Cellulite Looks Better Tan, Castle's post tackles the issue of rape culture on the playground. She encourages parents of girls to teach their daughters to fight back when bullied, regardless of whether someone tells them it is flirting or that it's all in good fun.

Behaviors such as hair-pulling, bra-snapping, and name-calling all come under fire in Castle's post. She argues that these are not only inappropriate actions, but they're also dangerous. (Romper has reached out to Castle for further comment on her viral post, but has yet to hear back.)

Castle gave her daughter — who is in the first grade — this advice, according to Babble, after she came home from school one day and was very agitated after being picked on by boys. Once she realized that her daughter wasn't just being dramatic, she stopped to listen to the story:

Rather than give in to the idea that these boys were practicing some perverted form of flirting, according to her blog post, Castle gave her daughter this advice:

NO. You will not let two boys ruin your free time. You will not allow them to take your fun away. They are breaking the rules. If they do that tomorrow, you say, "Keep your hands off of me." If they do not stop, you tell the teacher. If they continue to bother you, you turn around and step on their feet, or kick them in the shins or their business, and if you get in trouble, go ahead and tell your teacher to give me a call.

Castle spoke with Babble about the experience and her reasons behind writing her post. She told the website that she was enraged when she heard about her daughter's day at school, but she was also driven to do something about it.

"At that moment, I knew I had to empower her to defend herself, and the more I thought about it, I realized I never felt that kind of power myself, so I hoped in writing about my daughter’s experience, it might open up some dialogue between parents with their sons and daughters about how to handle a situation such as this one on both sides of it," Castle told Babble.

She went on to say that situations such as this are pieces of the bigger puzzle that is rape culture — a system that normalizes sexual violence. Castle told Babble that a lot of her friends had memories of being in similar situations as her daughter's, but felt unable or too afraid to stand up for themselves.

But, to truly find a solution to this toxic cycle, the answer lies within education.

Parents must fight against the "boys will be boys" mentality and teach their children to do better — to be better. Along with telling girls to "kick 'em in their business," there are a number of ways that parents can fight rape culture. Simple conversations about how "no" always means "no" is a good starting point for more advanced discussions down the road.

Due to its poignant message, Castle's post has been shared numerous times and she has received comments and messages praising her actions. "I’m a little overwhelmed with how relatable this is with so many women and men," she told Babble. "I’ve received countless private messages from moms (and dads) who applaud me for teaching my daughter to defend herself."

Education and open dialogue about the definition and nature of consent are important steps towards eliminating rape culture for future generations. And by teaching her daughter to stand up to bullies on the playground and sharing her story with the world, Castle has contributed to the greater conversation.