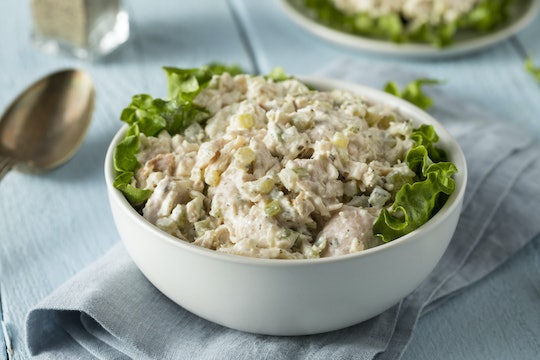 There's A Salmonella Outbreak In These States, So Check Your Chicken Salad ASAP

Like me, my son is a picky eating. Getting my toddler to consume food is like solving a Rubik's cube or navigating a government website. He likes nothing but meat, chocolate, and bread. But a few months ago, I discovered that my rambunctious little one loves chicken salad. Unfortunately, though, it seems chicken salad doesn't love children because the premade meal is linked the salmonella outbreak happening in these states. Worried you could be affected? Well, here's what parents need to know.

The U.S. Centers for Disease Control and Prevention announced last month that a salmonella outbreak had affected at least five dozen people in a handful of states, according to Tech Times. The CDC linked the outbreak to premade chicken salad made by Iowa-based butcher shop Triple T Specialty Meats that had been sold at deli counters in Fareway grocery stores across the country, Tech Times reported. Reports of a salmonella outbreak caused Triple T to recall more than 20,000 pounds of potentially contaminated chicken salad made between Jan. 2 and Feb. 7, according to a U.S. Department of Agriculture notice. (Romper reached out to Triple T Specialty Meats for comment, but did not hear back in time for publication.)

At the time, only Illinois, Iowa, Minnesota, Nebraska, and South Dakota reported cases of salmonella; the nasty food-borne pathogen causes fever, abdominal cramps, and diarrhea within 12 to 72 hours of exposure, according to Tech Times. But it turns out the outbreak has only gotten worse.

On Thursday, the CDC reported that another 105 people from six states had become ill from salmonella infection, making it a total of 170 cases in seven states. Texas and Indiana have been added to the outbreak list since the last update, according to a CDC map; Iowa has seen the most illnesses, at 149. There have also been 62 hospitalizations, but no deaths reported.

The CDC said it believes that the newest cases of salmonella infection occurred in people who bought chicken salad from Triple T Specialty Meats before the Iowa-based company recalled the product on Feb. 21, according to CNN. Public health officials recommend that anyone who had purchased the recalled premade chicken salad from Fareway throw away the product in order to avoid possible salmonella infection. Consumers should also toss the chicken salad whether or not it was frozen since purchase or half-eaten without any resulting signs of illness, CNN reported.

The CDC also cautioned shoppers to avoid eating the recalled chicken salad they purchased from Fareway grocery stores, even if they don't remember the date of purchase. Not only that, but the agency recommends that people wash and sanitize counter-tops, shelves, or drawers where they kept chicken salad, according to its website.

The number of people ill from salmonella poisoning is expected to rise, according to CNN. That's because, typically, it takes two to four weeks for a public health agency to receive a report of a salmonella illness due to the time between a person seeing a doctor and receiving results of the lab test.

Most people infected with salmonella get better within four to seven days, as long as they get plenty of bed rest and treat their symptoms, according to WebMD. However, people should see a doctor if symptoms do not disappear after a week, or if you're experiencing bloody stools, dehydration, and an ongoing fever. Young children, older adults, and people with weakened immune systems should make a doctor's appointment at the first sign of illness, as they are more vulnerable to complications.

If you live in one of the affected states, pay extra attention to any symptoms you or your kids may be feeling. And make sure to throw away any chicken salad pronto.