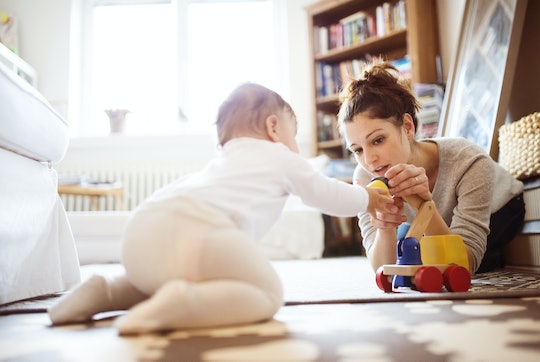 I'll admit that, as a child, I was high energy. I am pretty sure I was the single-handed reason why my mom was always tired. And it seems my toddler has taken after me in that regard. This boy is rambunctious, which is great because he's a kid and that's what kids do. But why? Why does he have to bounce around so much? The answer may lie in research: There's a scientific reason behind why your toddler has so much energy, and why you're so exhausted all of the time because they just won't stop. Why won't he stop?

More Like This
How Close Are We To A COVID-19 Vaccine For Children?
How To Wean Your Baby Off Formula & Transition To Whole Milk
9 Signs Your Child Is Overheated
How To Tell If Your Baby's Behavior Is A Sign Of Stimming

A new study published this week in Frontiers In Physiology found that young children have muscles that perform at a similar level as endurance athletes, according to Newsweek. In particularly, Australian researchers put young boys, untrained men, and endurance athletes through a strenuous activity test on a stationary bike, and discovered that the kids didn't tire easily, the study's findings show.

Not only that, but, according to researchers, young children may also bounce back at a faster than the well-trained athletes, Newsweek reported. That may explain why one round of intense play at the park doesn't run your little one ragged the way you hoped.

This new study is significant because we found that the children used more of their aerobic metabolism and were therefore less tired during the high-intensity physical activities than adults. Children also recovered very quickly, even faster than the well-trained adult endurance athletes, as demonstrated by their faster heart rate recovery and ability to better remove lactate, a metabolic byproduct contributing to muscle fatigue.

Of course, this doesn't mean that your toddler is as fit as an endurance athlete. It just means that their bodies make energy in a different way than adults, according to Tim Olds, a professor of health science at the University of South Australia who spoke with ABC News. Olds, who wasn't involved with the study, told the Australian outlet that there are two ways to produce energy: Aerobically and anaerobically.

When you expend anaerobic energy, your body produces lactate, which builds up in the muscles and causes you to feel tired, Olds told ABC News. This type of energy is burned during short, strength-building activities, such as sprinting, jumping, or weight training, where oxygen is not required, according to ScienceDaily.

But, Olds noted to ABC News, children do not have anaerobic systems that are as "highly developed" as the average adult, "therefore they don't produce a lot of lactic acid, and therefore they don't seize up after repeated bouts" of play and exercise.

But it's not just your child's physical make-up that causes them to be so high energy, which is completely normal. It's also their relationship to their individuality, and the world around them.

Think about it through the lens of bodily autonomy and testing boundaries. Dr. Ken Haller, an assistant professor of pediatrics at St. Louis University School of Medicine, told Parents:

At 4, a child has gained control over her body. This gives her a feeling of independence, and it naturally leads to more active behavior.

Basically, your kid is learning how to be a kid, and part of that is driving you to the point that you start falling asleep standing up. Honestly, as annoyed as I or you may get with your little one, it's a pretty awesome thing to witness. It means they're coming into their own. And that's something that should be nurtured, through and through.