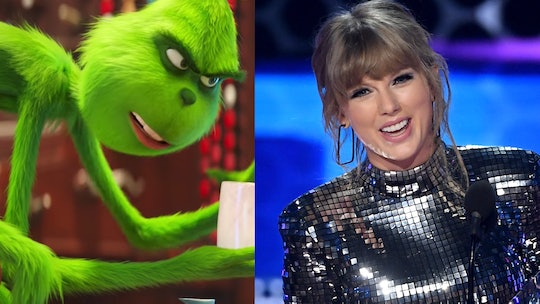 Did You Catch The Hilarious Taylor Swift Joke Hidden In The New 'Grinch' Movie?

Christmas season is upon us, which means so is Christmas movie season. A new animated version of The Grinch, about your favorite Christmas-stealing green creature, just hit theaters, and fans may have noticed an A+ pop culture reference hidden in the flick. Yes, there is a Taylor Swift joke hidden in the new Grinch movie — and people who remember the most popular memes of five years ago are sure to love it.

You may recall Taylor Swift's 2012 song "I Knew You Were Trouble" and the subsequent goat-inspired memes. Someone thought it would be funny to replace Swift's "OH!" sounds in the song with a screaming goat, and YouTube videos of the song's music video interspersed with a goat emitting a painful screech went viral pretty fast. So as an homage to that iconic meme, The Grinch creative team added a screaming goat character into the film.

Scott Mosier, who co-directed The Grinch along with Yarrow Cheney, opened up about the process of creating the goat character in an interview with INSIDER. “We’d already done the scene where we knew the Grinch was going to go out to try to find reindeer and find Fred [reindeer]," Mosier told the news site. "We’d already started to build that sequence, and then we were like, ‘This is missing something. There’s a layer of fun to be had as he’s journeying out into the woods.'”

He then admitted to the outlet that the goat was entirely inspired by the Taylor Swift meme. “I wish I could say it was some deep, artistic, creative core, but it was YouTube,” Mosier told INSIDER. “There’s a Taylor Swift remix of one of her songs with a screaming goat, and we all couldn’t stop laughing. I just think it’s the funniest thing in the world.”

The Grinch just hit theaters this weekend, and it's already doing well at the box office and getting mixed reviews. The movie, which is based on Dr. Seuss' 1957 book How the Grinch Stole Christmas!, brought in $66 million in North America during its opening weekend, as reported by The New York Times.

As explained by Polygon, The Grinch makes its titular character a more likable protagonist by providing a justification for his anti-Christmas attitude: he was raised in an orphanage, and was always jealous of other families during Christmastime.

According to Vulture, the movie has one or two awkward bits, but overall, "The Grinch offers a touching opportunity to enjoy the increasingly rare sight of a wicked one seeing the error of his ways." However, Rolling Stone criticized the film for playing things too safe, adding that the movie is "the perfect, computer-animated holiday fun for kids of all ages — preferably under five, when bright, swirling colors are all we need to distract us."

Benedict Cumberbatch provides the Grinch's voice (in an American accent), and other voice actors in the film include Rashida Jones, Angela Lansbury, Kenan Thompson, Cameron Seely (The Greatest Showman), and Pharrell Williams as the narrator.

So whether or not you think The Grinch is up your alley, it may be worth seeing purely for that screaming goat. I hope Taylor Swift finds time to check the movie out this holiday season!