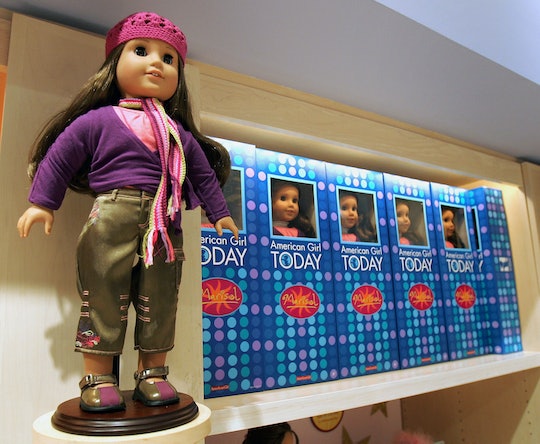 An American Girl Live-Action Movie Is In The Works, So Prepare To Feel Nostalgic

Standing at just 18 inches tall, the American Girl Dolls hold a big place in the hearts of tons of millennials. Many grew up dressing, playing, and collecting these iconic dolls and now have children who are doing the same. Fans are in for a treat because major American Girl Doll news just hit. There's an American Girl live-action movie in the works and it's about time.

MGM and Mattel, who owns American Girl, announced that there's going to be an American Girl dolls movie, according to USA Today. Although not a lot of details were given, it's still something to be excited about.

Casting information, release date and plot details are still unknown, according to Entertainment Weekly, but the news itself was announced on Friday, Feb. 15.

Mattel Films, MGM, and PictureStart’s Erik Feig will produce the movie, while Cassidy Lange, of MGM and Robbie Brenner, of Mattel Films will also play a role, according to Deadline.

"American Girl is a beloved, story-driven franchise lending itself perfectly to a feature film," Ynon Kreiz, Mattel’s chairman and CEO told Deadline. "In MGM and Erik we have world-class partners and we look forward to working with them to give our passionate American Girl fans of all ages another way to connect with this iconic brand."

American Girl Dolls hit the market in 1986, depicting all kinds of girls from different eras and cultures, according to USA Today. And of course they always came with books. Since their debut, more than 32 million dolls and 157 million books have been sold, according to Screen Rant.

While there were several made-for-TV American Girl Doll movies, only one made it to theaters, according to NPR. In 2008, Abigail Breslin starred in Kit Kittredge: An American Girl. The story follows a 10-year-old girl living during the Great Depression, with the one goal of selling a story to her local newspaper.

Kit was part of nine other historical dolls (Felicity from colonial Williamsburg, Molly from the World War II era, and more) that each came with a series of six books highlighting their particular moment in history, according to NPR.

This new movie would be just the second one slated for the big screen and would bring American Girl movies to a whole new audience. And the audience would clearly be both moms who used to play with the dolls themselves, and their children who are now doing the same. Talk about nostalgia!

It's been a big month for Mattel. They also announced two more movies based on popular toys: Hot Wheels and Barbie. While not much is known about the Hot Wheels movie, fans do know that Barbie will be played by Margot Robbie, according to Harper's Bazaar.

Fans have been able to interact with American Girl dolls in a new way as of late, thanks, in part, to the American Girl Live Tour, a musical production with an all-female cast, according to Variety. The 90-minute show is running through the end of May, with shows across the United States. More information can be found at AmericanGirlLive.com.

So, will you be first in line for tickets to the new American Girl doll movie? There's no telling how long it will take to bring it to the big screen, but one thing's certain. It's bound to be a huge hit. So, grab your doll and brush up on your favorite backstories before then.

More Like This
20 Fun Facts About 'Elf' That Will Make You Love The Movie Even More
How To Watch Elf In 2022, Including A 24-Hour Marathon
Here's How The Cast Of 'Wednesday' On Netflix Compares To The '90s Movies
Every Night 'Home Alone' Airs On TV In 2022