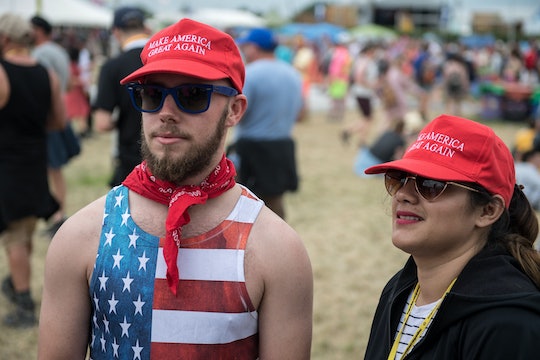 Have you ever looked at Yelp restaurant reviews and felt that a certain category was missing, i.e. political climate? Yeah, me neither. But if you're looking for a cappuccino that comes with a side of conservatism, there's a new app for Trump supporters that will help them find "safe" places to wear their MAGA hats. And, as you can probably guess, Twitter has had some less than positive reactions to it.

The app, appropriately named "63red Safe," sets out to help Trump supporters "Find great restaurants nearby, and see how expensive, how far away, and best of all, whether they are safe for conservatives!" as the app's description in Apple's App Store explains. It was developed by Scott Wallace, who is supplying reviews of restaurants and businesses written "from a conservative perspective," so that conservatives can feel "safe" when shopping and eating, The Washington Post reported.

The "safe" or "unsafe" categorization is determined by crowd-sourced answers to these four questions, according to The Hill:

Despite how it may seem, Wallace has stated that the app isn't intended to promote solely conservative businesses. According to INSIDER, Wallace told Fox & Friends on Monday that 63red Safe is meant to take politics out of dining all together: "We wanted to make sure that people could let others know what restaurants may have a political bent. We're not looking to try and find restaurants that are conservative or pro-Trump. Our aim is to get politics out of local businesses, local restaurants and make everyone feel comfortable when they go out."

Further explaining his reason for developing the app, Wallace wrote on Medium that GOP supporters have been under attack since Trump took office, writing:

Despite Wallace's insistence that his app "takes the politics out of dining," many on Twitter seem to believe the opposite. The word "snowflake" popped up more than a few times, and it wasn't in reference to liberals this time.

Others pointed out that grouping a bunch of Trump supporters together in one place will do little to encourage their critics to lay off, quite the opposite in fact. "That's all trump [sic] supporters need," one user wrote, "an app that tells crazy democrats where to find a group of people to harass!!"

Many on Twitter also said that — much like the Trump presidency itself — the 63red Safe app will only serve to further divide people on opposite ends of the political spectrum.

Despite the negative reactions on Twitter, Wallace said the app isn't going anywhere any time soon. He told The Daily Beast that he expects it to grow even more popular as 2020 approaches, expecting Trump supporters to be targeted more than ever: "I think Antifa was nothing compared between now and what's coming in 2020. And I'm deeply concerned ... We're committed. This is not yet another a Trump dating site. This is not yet another social network."

Numerous outlets have reported on the unique divisiveness of Trump's brand of politics. In 2017, The New York Times reported that Trump marks the first occupant of the Oval Office in modern times to "reject so thoroughly the nostrum that a president’s duty is to bring the country together." He has systematically attacked Congress, the courts, Democrats, Republicans, the news media, the Justice Department, Hollywood, the military, NATO, the intelligence agencies, the cast of Hamilton, the cast of Saturday Night Live, the pope, and even professional athletes during his time in office, forcing people to choose sides in endless debates they never asked for.

So, who's to say if this app will succeed? But fortunately, if this all seems a bit wild to you, you can always opt out of downloading it. And choose your restaurants based on, dare I say, the quality of the food.