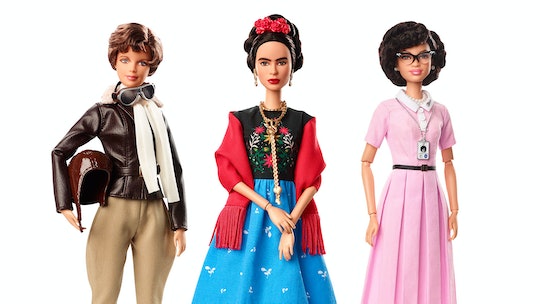 Barbie Is Releasing A New Line Of Dolls Inspired By Badass Women, So Get Your Order In Now

Struggling to find a strong female role model for your youngster? Look no further. In anticipation for International Women’s Day on Thursday, there's going to be a Barbie version of Chloe Kim and 13 other badass women available to inspire kids everywhere. From historic heroines to modern day female superstars, Barbie is here to supply you with every kind of inspiration necessary to encourage you and yours to chase their dreams.

First, Barbie is adding 14 modern-day role models to its Barbie's Shero program. These are women who "have broken boundaries in their fields and have been an inspiration to the next generation of girls," and it is adding a few more names to its roster. The newest members of the line include filmmaker Patty Jenkins, snowboarder Chloe Kim, conservationist Bindi Irwin, and boxing Champion Nicola Adams. They will be in good company, as the line already includes big names like director Ava DuVernay, actress Emmy Rossum, ballerina Misty Copeland, and Olympic gymnast Gabby Douglas. These dolls will be one-of-a-kind and won't be for sale, according to Mashable, though some of the popular dolls could go on sale in the future (the people want a Chloe Kim right now!), according to HuffPost.

The second line that Barbie is expanding is the "Inspiring Women" doll line of notable women throughout history. These women come from all over the world, and the new additions include Amelia Earhart, Katherine Johnson, and Frida Kahlo. The powerful stories behind each of these women will be included in the box to help their owners learn more about what makes them so special. Here's where you can pre-order Barbie's "Inspiring Women" line.

Lisa McKnight, the senior vice president and general manager of Barbie, said on Tuesday in a press release that these dolls are helping the brand continue its mission of inspiring girls not to limit themselves:

Barbie will be honoring its largest line up of role models timed to International Women’s Day, because we know that you can’t be what you can’t see. Girls have always been able to play out different roles and careers with Barbie and we are thrilled to shine a light on real life role models to remind them that they can be anything.

The Barbie press release also stated that 86 percent of surveyed U.S. moms are concerned about the types of role models that their daughters are exposed to, and they may have cause for that concern. A 2012 study by Girlguiding UK asked girls between the age of 7 and 21 who they look up to. Many of them pointed to reality TV stars and other celebrities as their inspiration, looking to them for guidance on how to live their lives, according to the BBC. More than half of the girls and young women involved in the study stated that they perceive a lack of strong, inspirational women in general to look up to.

Tracey Murray, head of guiding development, told the BBC that celebrities may give girls an unrealistic view of life. Rather than rely on celebrities alone, Murray would rather see girls pull inspiration from many fields:

We want to hear that girls are exposed to a broad range of women, so that they can have aspirations and interests, and are encouraged to make the right choices for them in future.

By looking to role models from the worlds of art, professional sports, science, and more, Barbie is diversifying the pool of inspiration for girls everywhere. No matter where your interests lie, chances are Barbie has an inspiring woman for you. If not, Barbie is calling on fans everywhere to share #MoreRoleModels on social media and tell the company about the female role models who inspire them. Who knows, maybe they'll end up on the toy shelves one day.