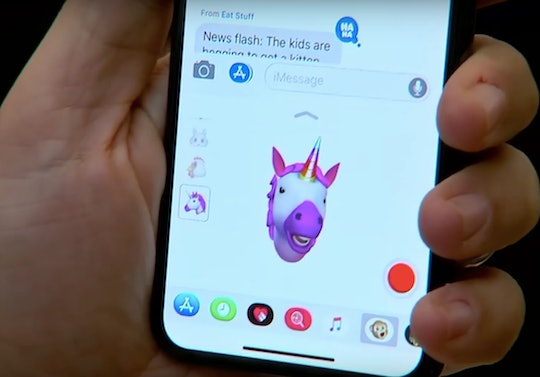 These Animoji Tips, Tricks, & Hacks Will Help You Get The Most From Your iPhone X

Some bought theirs for the FaceID, others for its edgeless screen — basically, everyone has their reasons for wanting the new iPhone X. For the young-spirited among us, Animoji (aka talking, singing emoji characters) were a huge sell. These Animoji tips, tricks, and hacks will help you make the most of your new gadget, so you'll be an Animoji pro in no time.

If you don't know, Animoji are emoji that — you guessed it — are animated using iPhone X's face mapping technology. Puppies, foxes, unicorns, chickens, rabbits, cats, pigs, robots, aliens, and even piles of poop tilt their heads and move their mouths as you do, blowing Snapchat filters out of the water. The videos can be recorded and sent as messages to other users (and their utility doesn't stop there). Seriously, these guys are too cute, it's no wonder that Twitter's obsessed. So, here's what you need to know about the fun new feature.

Animoji karaoke videos are everywhere right now. It's kind of like Musical.ly in that it can create a singing Animoji. Users can just bob their heads and lip sync to songs, most likely playing from another device. People have really gotten creative with this one (seriously — do a YouTube deep dive, there is so much content). Check out this example below!

Next, Make Your Videos Even Longer Than 10 Seconds

If you're recording your Animoji within the Messenger app, you're limited to 10 seconds of playtime. But if you want to make an Animoji longer than this, opt for using the "record video" feature instead, therefore just recording a live play-by-play what's happening your phone while the Animoji screen is still up.

Now, Create Your Own Animoji Stickers

Did you make a face so cute (or gross or weird) that it warrants immortalization? Macworld advises: "Just bring up the Animoji interface, pick your character, make a face, and drag the Animoji up into the messaging window like you would any other sticker. BOOM." Sounds simple enough!

Wanna Be Sneaky? Choose Which Character Fits Your Recording AFTER You've Recorded

A Reddit user claims that you can record your Animoji video and then switch between the possible emoji faces, and others have confirmed the operation. By simply swiping through the different options, you're saved the trouble of having to record and re-record in the event that the robot just doesn't fit your vibe.

Get Personal With This Valuable Eyebrow Hack

One Twitter user found that in order to get his monkey Animoji to depict the famed "people's eyebrow" (paying homage to Dwayne "The Rock" Johnson), he needed to half wink and half raise his one eyebrow. The results, as you'll see above, are certainly worth replicating.

Finally, Trick Your Kids Into Behaving

Actor Lance Gross had a brilliant use for Animoji as a disciplinary tool, going to far as to call it a life hack. Under an Instagram video of a talking pig, he wrote: "For parents with Toddlers, use Animoji’s [sic] on your iPhone to get your kids to behave or send kool messages. They’ll love it!" He personalized his own message for his daughter, with the "pig" saying: "Hey Berkley, you have to listen to your parents. You have to do everything they say — no crying!" He also, of course, added in some appropriate piggy snorts.

iPhone X users have exclusive Animoji privilege at the moment, having the enviable ability to send out videos to their non-Animoji having friends. Tips and tricks like these take the recordings to the next level. My personal favorite has to be Animoji karaoke, though — a dog singing "Mr. Brightside." C'mon, you just can't top that.