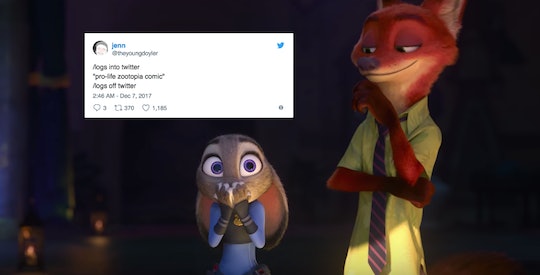 Another day, another strange thing trending on the internet. This week, one of the stranger things spotted online was a series of seemingly anti-abortion Zootopia fan comics — and the... uh, interesting fan fiction definitely annoyed a large part of the internet. Especially the Zootopia fans out there, who were all a bit weirded-out and unimpressed.

In case you haven't already seen it, Zootopia is an animated Disney movie that was released last year. It follows the adventures of a fox and a rabbit in a big city, and it holds some valuable lessons for children on racial profiling and police brutality, according to New York Magazine. Kids loved it. Parents loved it. Even Rotten Tomatoes loved it — so it's safe to say Zootopia has a fairly large group of fans.

One fan, apparently, decided that Zootopia would make the perfect vehicle for a discussion on abortion. Twitter user Eric Munn shared a shot of the comic, along with the caption "In case you didn't think the internet could get any weirder - I discovered there's a Zootopia pro life fanfic comic."

After people got over the initial weirdness factor, they started looking up — and sharing — more pages from the fanfic comic:

The comic was created by Deviantart user William Borba, who posted "I Will Survive" on the art-sharing website earlier this year. You can read a compiled version on the Zootopia News Network if you'd like to experience the comic for yourself. Otherwise, here's the SparksNotes version: Judy discovers she's pregnant, then has to tell her partner, Nick, that she's not planning on going through with the pregnancy. It ends with Nick walking out the door saying it would have been better for them both if Judy had kept him in the dark about her "premeditated sin."

There are a lot of other dramatic moments packed into the comic, including a shouted "Why, Judy?! Why?!" as well as a plea for Judy to let her "light" continue to shine through their unborn child. Judy slaps Nick. Nick dismisses Judy's very legitimate concerns that a rabbit-fox child might not be genetically healthy or that a pregnancy like that could harm her health. And as he walks out the door forevermore, a tear slipping down his face, Nick issues a final: "Don't worry about me. I'll survive." (Yeah, woah.)

According to Borba, however, the comic isn't meant to be pro-life or pro-choice:

The only thing I have to say is that many people are getting ["I Will Survive"] completely wrong. It isn't either a pro-choice or a pro-life comic. At least, it exposes the arguments of both sides without allying to none. In addition, the expressions, emotions and situations have been exaggerated on purpose, so that the reader feels as uncomfortable as possible, sucking him or her into the center of this maelstrom.

The main point of the comic was to show how even an apparently eternal love can fall apart when a couple is unable to overcome their differences and come to an agreement in a situation that endangers their relationship. I made that very clear in the text on the last page, which I believe leaves no doubt about the main intention of the comic.

Despite Borba's explanation, the internet had quite a few interpretations — and reactions — of its own to share:

Others have been a bit more complimentary in their praise, including Zootopia News Network writer Andy Lagopus, who wrote in June:

Major props to Borba, not only for deciding to tackle such a hot-button topic, but for deciding to stick to it even after getting a lot of hate for it. That's artistic integrity for you.

Romper reached out to Disney about the fanfic comic, but did not hear back immediately. (And in all fairness, if studios and publishing houses responded to all of the fanfiction that makes its way onto the internet, they probably wouldn't have time for much else.)

There's a Zootopia sequel movie rumored to be in the works, with fans guessing at a release date in 2021, according to Inquisitr. That might seem far away for some, but if you're still trying to process that overly emotional fanfic comic, it might be just enough time to try and forget what you saw. I know I'll be trying to do the same.