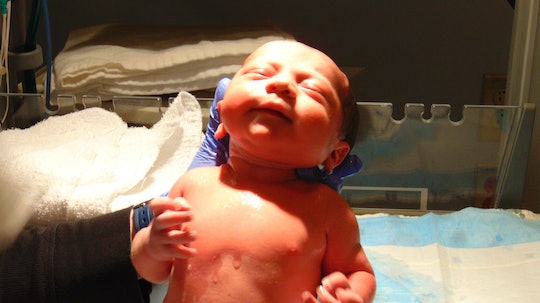 These Are The Best Hospitals For C-Section Patients

The rate of C-section births in the United States is much higher than experts want it to be, given that such a delivery is a major surgery with real risks. According to a recent Consumer Reports investigation, almost 60 percent of hospitals analyzed had C-section rates that exceeded the national Department of Health and Human Services' goal rate of 23.9 percent for low-risk births. Currently, one-third of all babies born in the United States come into the world via C-section, with experts estimating that a whopping half of those surgeries weren't medically necessary. It's a troubling stat, but moms who do need (or want) to deliver this way for whatever reason are going to want to know the best hospitals to have a C-section.

There are plenty of reasons why a woman would need to have a C-section — such as problems with her placenta, for twins or other multiples, or a chronic health issue like diabetes — but the national average for even low-risk births (baby at full-term, not breach, etc.) is still at 25.8 percent. To that end, it seems as though the hospital choose is the most dominant sole determinant of whether they'll end up having a C-section.

In announcing the publication's intent to rate the best hospitals for childbirth last year, U.S. News & World Report's Ben Harder noted that C-sections instead of vaginal births "often occur in the absence of a clear medical rationale." Simply put, medical professionals often opt to perform C-sections based on factors other than what's best for the woman and her baby.

As Quartz reported this year, teams from the MASS Design Group, the Robert Wood Johnson Foundation, and Ariadne Labs recently determined that design can affect the rate of C-sections at a particular facility. Their results are striking: Because C-sections are quicker than vaginal births, hospitals with fewer rooms and more patients performed more C-sections. On the other hand, the data showed that ensuring birth areas have space for women who are in labor to walk around, for example, or give them easy access to labor support tools like birth balls, could lower C-section rates.

Costing an average of $16,038, C-sections are also costlier than vaginal births, which typically cost patients around $12,560, according to Consumer Reports. This could incentivize doctors to go for the C-section when it will ensure a bigger payday, NPR reported. This could be the case even though women who have C-sections are more than twice as likely to be hospitalized again within 30 days of giving birth than those who deliver vaginally.

So, delivering at a hospital with a low C-section rate may give new moms higher confidence that they truly need the surgery, if it's what medical personnel decide to do. Over the course of its investigation, Consumer Reports identified the large U.S. hospitals with the lowest C-section rates for first-time moms with low-risk deliveries. Here are the top five:

You can access the complete list, as well as the list of hospitals with the highest C-section rates, on Consumer Reports' website. But for some women, this information simply won't be a factor when deciding where they will have their babies: A recent study found that 75 percent women with low-risk pregnancies who are trying to avoid having a C-sections would not decide to leave their chosen hospital based on its C-section rate. That was true even when they learned that whether they ultimately have a C-section may hinge on administrative issues like staffing rather than their physical condition.

Of course, there are plenty of medical situations that would require a woman to have a C-section, or she may decide to have one for any number of personal reasons. That's not the problem. The problem is that many woman end up getting C-sections for reasons that have nothing to do with their health, even when they would have preferred to give birth vaginally.