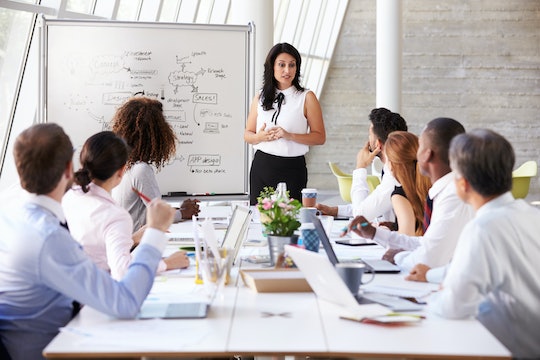 These Are The 10 Best Workplaces For Women, New 'Forbes' Study Finds

What makes a workplace an awesome place to work? Is it the benefits, the decor, the atmosphere, your coworkers? Is it some combination of all of those things? One recently study focused on just what makes a workplace a great place to work for women, and in particular looked at which businesses "go above and beyond" for female employees, and some of the selections on the list may be surprising. The 100 Best Workplaces for Women cross industry and regional lines, and a few of my personal favorite companies are included on the list, compiled by Fortune and its partner on the study, Great Place to Work.

But when Fortune and Great Place to Work came up with this list, they didn't merely throw together the listing and call it a day. The partners also analyzed the data they collected, and found that there are significant gaps in how women and men feel about their jobs and careers. By looking at their findings, the 100 Best Workplaces for Women researchers discovered that some things that many companies might assume would make a great workplace for women are not always translating to actual workplace satisfaction for those women.

For example, the research found that a great work-life balance had a "limited effect" on female employees staying with a company. However, women who said they’re treated like "full team members" (it's unclear what this meant, but it could mean they were made to feel like part of the team to the same degree as their male colleagues, etc.) regardless of what their position is, were five times more likely to plan for long-term careers at those businesses. That's compared to people Fortune and Great Place to Work spoke with who didn’t feel they were treated that way. What a concept! Being treated equally for the doing the same work as your colleagues leads to higher workplace satisfaction. Who would've thought? Kidding. That should be obvious.

Anyway, let's get to the fun stuff. The top 10 companies on the list of 100 Best Workplaces for Women are as follows:

Which is a pretty varied list, when you break it down. It includes hospitality, financial services, health care, and even a grocery store chain. I'm personally thrilled by the inclusion of Wegmans, actually, which I believe to be one of the best places on Earth, and which is regularly considered one of the best companies to work for in the country.

So what set these companies apart from the countless other companies that could have been included? There were a few significant factors, according to Fortune.

The first company on the list, Texas Health Resources, helps employees work on their academic credentials, from earning a GED up through graduate work, according to Fortune. So, offering professional development possibilities is clearly a positive. Delta, another company on the list, reportedly offers bonuses when "operational targets" are met, which directly benefits employees for the hard work that they do. Again, is this really a surprise?

Companies that want happy, successful workers would do well to be more like the companies on this list. Every company should work on being a great place for women to work. Especially because other studies have found that workplace satisfaction for women is a real problem — for example, women are less likely than men to believe that unfairness in the workplace will be rectified, according to a study Forbes reported on. The same research found that women feel generally less influential and less challenged at work compared to men, according to Aon, a professional services firm that did the report.

This newest study used more than 50 different metrics to determine the best workplaces, and you can take a look at the methodology of the findings here. But generally, what it comes down to is that women want to feel challenged in their roles, and like an equal part of the team as their colleagues.

Workplaces that encourage development, foster leadership, and reward successes were winners on the Fortune/Great Place to Work list, and it didn't really matter what field the work as in. If other companies want to earn their way onto the list, they should work towards higher overall workplace satisfaction for all their female employees — or just call up the Wegmans corporate office, and ask for some tips.