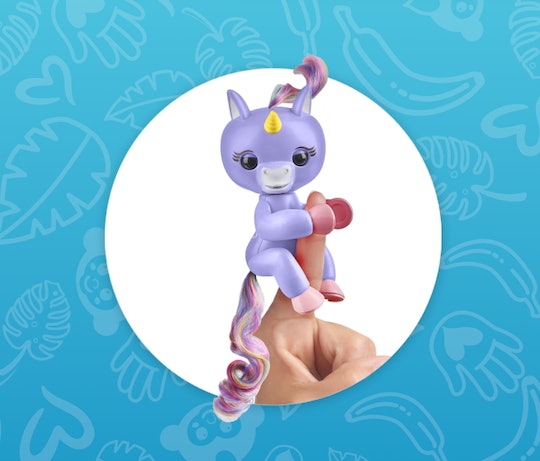 "Friendship at Your Fingertips." This is the pitch for this year's hottest must-have toy, Fingerlings. Who wouldn't want to have an adorable little friend at the tip of their hand? Unfortunately, unless you were extremely organized, foresaw what a craze this was going to be, or have been camping out at Toys 'R' Us non-stop, you might not have snapped one of these precious animal robots in time. Worry not, though, as there are brand new fingerlings available for the holidays. Yep, now is your time to shine.

WowWee toys just introduced a few new Fingerlings, in an attempt to provide a Fingerling to the children who have it in the number one spot on their holiday wishlist (and the parents who are eager to be the 'best parent in the world' if they snag one). They have acknowledged that it's not always easy and the Fingerlings are in short supply, saying in a December 15th post of the newest additions: Our new friends will be slowly popping in at exclusive retailers and super rare to find this holiday season, but there will be more coming in the New Year!" So, even if you're not able to snag one in time to put Santa's name on the tag, you can still be optimistic about the New Year.

WowWee has told Romper that the three unicorns, Aliki, Gigi and Gemma were shipped to Toys 'R' Us this weekend and that Toys 'R' Us will be the exclusive distributor for those three. A variety of the two-toned monkeys have been shipped out to several stores, though there will be some stores that have them exclusively, like Ava at Toys 'R' Us.

Toys 'R' Us is only selling Fingerlings in the stores, so you can't desk surf and order them from that retailer online. You may want to call before you go, and suggest befriending one of the Toys 'R' Us stock clerks and see if they can get you some advanced notice about when the shipments are coming in. You can also check out the latest news on the Fingerling Facebook Page. There might not be much wiggle room if you delay, even by a few hours, as these adorable toys probably disappear almost as soon as the boxes are opened.

Because of the intense demand, WowWee is warning against counterfeit Fingerlings that may be infiltrating the market. While you might not mind swinging a Birkin Bag knockoff or donning a fake Rolex, kids have an uncanny ability to tell real from fake, so you might want to be extra careful about this. WowWee put together a guide to recognize whether your Fingerling is authentic or fake. They are encouraging people to be very skeptical and extremely careful when shopping, particularly on Amazon, Walmart and Best Buy sites. They say that you should avoid third-party retailers and look for the following words on the product listing:

At the end of the day, as nice as it is to hear the squeals of joy when the kids unwrap a new friend, especially one they've been wanting so so badly, even the most vigilant parent or one who tries as hard as they can, might be out of luck. If you can't get one till January, what kid wouldn't want a Fingerling to usher in the New Year? If it doesn't work out until February, then Happy Valentine's Day! I promise that when they look back on their childhoods, they will not remember that they needed to wait five extra weeks for a Fingerling, just that they got one in the first place.

In the meantime, we wonder what creative, mythical creatures WowWee will release next.