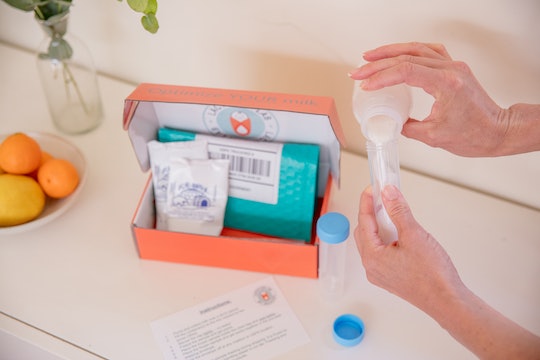 Year after year, the percentage of babies who are breastfed continues to rise, according to data from the Centers for Disease Control and Prevention. Breast milk is full of nutrients and vitamins essential for babies' growth and development. And while there's an ample amount of research done on the benefits of breast milk, it's also fascinating to know exactly what nutrients it's providing babies. And this is exactly what these new breast milk testing kits aim to do.

The American Academy of Pediatrics recommends that babies should be exclusively breastfed for the first six months of life, so they can "achieve optimal growth, development, and health." Breast milk is often hailed as liquid gold for various reasons. For starters, it's free and it can help reduce the risk of asthma and obesity in babies while lowering a mother's risk for getting heart disease or certain types of cancer, according to the CDC.

Knowing what nutrients your child is getting is also important because, as the AAP found earlier this year, what children receive during the first 1,000 days (or first two years) of their life is absolutely vital to their future neurodevelopment and mental health. The AAP's research found that it's imperative infants get proper amounts nutrients like protein, zinc, iron, choline, Vitamin A, Vitamin D, Vitamin B-6, and Vitamin B-12, which is a lot to keep track of and enough to make any new mother even more overwhelmed.

But for moms who would like to know exactly what their breast milk is providing their baby, there are testing services like Lactation Lab.

Research has found that breast milk is uniquely suited to the infant being fed, as well as the mother who is making the milk, according to one study published in February 2013. The composition varies from stage to stage in an infant's life, but at its core contains calories, carbohydrates, and proteins that are vital for babies.

Indeed, a lot of research has been done on breast milk, but Dr. Stephanie Canale, a mom of two, simply wanted to know more. After Canale found that her second child was not gaining enough weight, she decided to test her own breast milk. Ultimately, Canale, a family practitioner based in California, found that she had iron-deficiency anemia and low B-12 levels in her milk.

Her discovery inspired her to help other moms who would like to know about their own milk, so she created Lactation Lab, a science based kit that puts breast milk through a number of tests and then delivers a detailed report.

"This started out of my own need," Canale tells Romper. "My daughter wasn't gaining weight. I thought 'I'm a doctor,' and at the time, I felt like the biggest failure in the world. I wanted to know what was in my milk...as a doctor I began to notice other moms struggling."

Lactation Lab tests for nutrients (such as fats, iron, and different vitamins), fatty acids, and toxins (such as lead and mercury) in breast milk compiled over a 24-hour period. All women have to do is purchase a test kit, fill one to two provided sample tubes with breast milk over a day and ship them back to Lactation Lab. According to Canale, the tests look at how a mother's diet affects her breast milk.

"Knowledge is power," Canale says. "For some moms, it can be a tool for them to choose what they choose to do, even longer. And make it even better for them and their child."

Within a month, the results are emailed to you, breaking down what's in a mother's breast milk along with recommendations for how to ensure you're getting the proper nutrients. Results are tangible and clear to mothers about what to do next, Canale tells Romper. A comprehensive testing kit costs $249, while a basic testing kit which only tests for amounts of calories, carbohydrates, protein, and fat in breast milk costs $99.

Canale tells Romper that this test can give mothers some peace of mind — whether they choose to exclusively breastfeed or supplement with formula after they get their results back.

"We're not looking for deficiency [in breast milk], we're looking to help optimize it," Canale says. "A lot of the time, we find that a lot of the recommendations point to more vegetables. It's not as simple as that, but a lot of it is. So what we're doing then, is giving moms concrete plans and that becomes more long term healthy habits."

Canale tells Romper that she is a champion for moms to breastfeed or bottle feed their babies; her two children were fed both by bottle and breast. Ultimately, she says, this test can help provide moms with helpful insight.

"If you want to do breast milk, and you're conscious about what you're eating or you're trying to be healthy, sometimes it's as simple as having an avocado every day with lunch," Canale says. "It's nothing major."

But there are some medical experts who believe breast milk is fine as is, according to the Wall Street Journal, and mothers shouldn't be too concerned about the macro information, because its nutrients are "consistently of high quality."

Dr. Wendy Sue Swanson, a pediatrician and chief of Digital Innovation at Seattle Children's Hospital told Good Morning America that she's concerned about what kind of messages testing kits may send to mothers who are just trying to feed their babies. "I think we have to take a really careful look at what this puts out to the world and how it really affects moms who are just trying to do their best, supporting themselves, and their babies," Swanson told Good Morning America.

But Canale disagrees. "The bottom line behind this is — it's not about scaring moms," she tells Romper. "This is not about instilling fear or [making them] feel inadequate. This is about tangible, actionable results. [We're saying] focus on three things [in your diet] instead of this overwhelming idea of supplements and lactation support on lactation cookies."

Canale adds, "A mom can just be curious about their breast milk, but what what we look for is established in the literature."

According to ABC News, there are no independent studies that have verified the accuracy of breast milk testing kids. But, according to Canale, Lactation Lab measures its success based on testimonials from satisfied customers, who have told them how important it was for them to find out the composition of their breast milk.

"I think some of these women are feeling good and pretty empowered by our kits," Canale says. "I think it's been cool to see how a lot of women have been embracing this."

At the end of the day, it's up to the mother to take the recommendations from the report given to them by Lactation Lab. Although breastfeeding, pumping, or breast milk tests might not be suited for everyone, it can help mothers who are concerned or simply curious about their breast milk. "We help moms do what they want to do," Canale says, adding:

When you have objective data in front of you that tells you your kid needs a little bit more of something [from you], then it should make you feel a little less guilty [with your decision]... it can be so helpful. It's not for everybody, but there isn't a test in the world that is for everyone.

Deep down, every mom simply wants peace of mind. And if knowing more about her breast milk will help do that, then as Canale says, "knowledge is power."