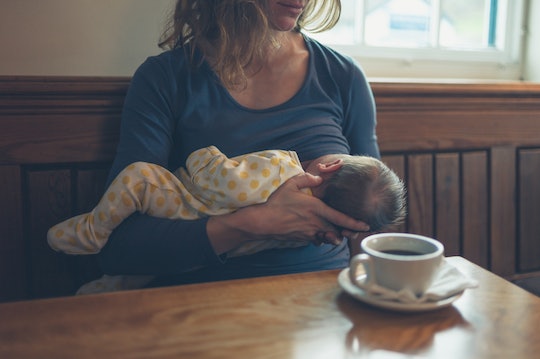 These Breastfeeding Laws (& Lack Thereof) Will Seriously Piss You Off

While the United States has certainly come a long way in making progress for women's rights, there are still some injustices going on that need to be addressed, and it's more than just the wage gap. Yes, these injustices trickle down to mothers (and their families) and there are still some breastfeeding laws that exist that'll seriously piss you off, because not every nursing mom has the same protections.

More Like This
Are You Breastfeeding & Also *Starving* At Night?
5 Signs Your Breast Milk Has Gone Bad
How To Keep Your Toddler Busy While Feeding Yet Another Human
Here's The Deal With Biotin & Breastfeeding, According To Experts

The Affordable Care Act does require "an employer to provide reasonable break time for an employee to express breast milk for her nursing child for one year after the child's birth each time such employee has need to express milk," according to the National Conference of State Legislatures. But, it's important to note that this law isn't applicable to every workplace. For example, a workplace with fewer than 50 employees can request to opt out of the requirement if it's too difficult to comply with. Still, the ACA's breastfeeding mandate is incredibly important to have in place.

Just Because Public Breastfeeding Is Legal, Doesn't Mean It's Protected

That means there are still 21 states where such claims can still be made. In 2012, for example, a Georgia woman breastfeeding her daughter during a church service was allegedly told to stop and threatened with "public indecency charges" after her pastor compared breastfeeding to "stripping," according to TIME.

Indeed, 49 states have legislation in place that allows women to breastfeed in any public place where they're allowed to be. But, by not protecting women from being accused of indecent exposure for simply feeding their child, states are continuing to allow breastfeeding to be sexualized.

Jury Duty Can Also Be An Issue

As STAT reported, only 17 states "exempt or postpone jury duty for nursing mothers." And according to La Leche League International, those specific laws relating to accommodating breastfeeding mothers for jury duty partially include Idaho, Kansas, Oregon and Nebraska, which "provide that jury duty will be postponed until the mother is done nursing the child. Also, according to the organization, "Kentucky not only provides an exemption for breastfeeding mothers, but also those who are expressing breast milk."

Those are just a sampling, but that's not the case for all states. For example, a breastfeeding mother in Minnesota reportedly had some troubles when she was assigned jury duty earlier this year. In an interview with TODAY, 40-year-old Amanda Chandler detailed her uncomfortable experience when she was assigned jury duty and was promised a quiet room she could use whenever she needed to pump. However, after she was allegedly refused time to pump for hours on end one day, Chandler finally got some respite, sort of. "But when she asked to pump later that day, the clerk led Chandler to a private unisex bathroom, not the quiet room," TODAY reported.

While the ACA's "Break Time for Nursing Mothers" mandate that's currently in place states that employers must provide an area other than a bathroom for a woman to breastfeed or pump, it's not that simple. As STAT reported in 2016, "about half of states don’t have laws related to breastfeeding in the workplace."

As the United States Breastfeeding Committee noted, the "law only covers employees who are covered by the FLSA," the Fair Labor Standards Act. The FLSA "establishes minimum wage, overtime pay, recordkeeping, and child labor standards affecting full-time and part-time workers in the private sector and in Federal, State, and local governments," according to the United States Department of Labor. But, in order to be covered by the FLSA, your job must qualify under either 'enterprise coverage' or 'individual coverage.'" As with the ACA's mandate, there are certain, similar stipulation that'll determine whether nursing moms are protected.

With these laws in place, there are actually a handful of court cases that prove discrimination in the workplace for breastfeeding mothers still exists. In 2015, for example, years after the law was put into place, Angela Ames "sued her employer when she returned from maternity leave to find that no allowances had been made to enable her to pump breast milk for her baby during the day," according to Alternet. When she asked for reasonable accommodations, Ames was allegedly told that she should "go home and be with your babies," the site reported. Ames reportedly worked for Nationwide Insurance at the time, a company that is in fact, subject to FLSA regulations, according to government records. Ames' case was also rejected by the Supreme Court of the United States, which determined that it was "not sex discrimination, in part because men can lactate under certain circumstances" according to the American Civil Liberties Union.

And this isn't the only time a woman has been denied the proper accommodations at work. According to the ACLU, a police officer was refused proper breastfeeding accommodations when she returned from maternity leave, which eventually forced her out of her position. She did eventually win her discrimination case, as People reported.

Even though breastfeeding is one of the most natural and beautiful things in the world, too many women still don't have the freedom and protections to do it wherever and whenever they need to. And that needs to change.