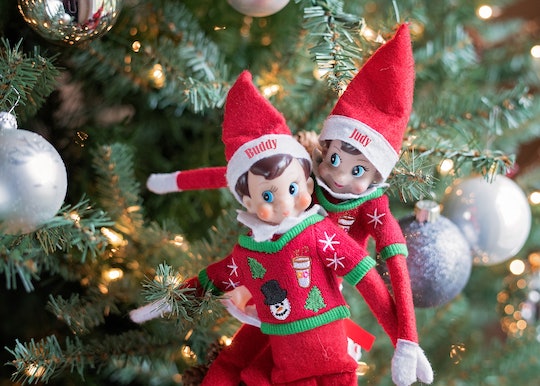 Scrolling through Instagram on any given day can make you feel totally less than. Scrolling through a celebrity's Insta can make you feel even worse. Add in the celebrity's fabulously clever and supremely well-executed Elf on the Shelf setups, and it's just time to give up. It's amazing to see all of the celebrities rocking Elf on the Shelf. How do they do it? Do they have stylists who help them? Do they stay awake for hours and shop for days, dreaming up clever ideas or do they make their assistants do it?

Celebrity parents, from American Idol superstar Kelly Clarkson, to hilarious actress Busy Phillips bring their A game each year to create fantastic Elf on the Shelf scenarios hanging them from the ceiling, arranging them with their kids' other toys, hiding them in the Christmas tree, and more. But first, here's a bit of backstory if you're not familiar with this voyeuristic elf. The Elf on the Shelf came into being in 2005, as a picture book and plush doll set. The premise is that the elf is watching over the children to make sure they are behaving. Each night the elf flies back to the North Pole to report the child's behavior to Santa and then swoops back into the house, finds a new hiding spot and resumes his spy duties. It's a little white lie that seems like innocent fun to keep the kids in line during the holidays.

However, reports of severe elf-on-the-shelf-induced stress have since popped up. Parents are setting their alarms for the middle of the night, creeping out of bed to find a clever spot for the elf, only to be met with unimpressed boredom by the kiddies. Moms everywhere have taken to Instagram, Facebook and Pinterest trying to one-up each other in the elf-hiding Olympics. Just when it felt like it couldn't get any more stressful, celebrities are raising bar, showing off their elf poses, too — and they were way more elaborate than poses that us mere mortals can create.

In the spirit of the holiday (and with the full knowledge that you will probably won't achieve this kind of elf supremacy) here are a few photos from celebrities who have mastered the elf tableau.

More Like This
These New Petco Halloween Costumes for 2022 Are Pawsitively Boo-tiful
These 15 Air Purifiers Are Some Of The Best For Your Home
How To Tell If Someone Is Lying To You: 34 Signs To Watch For
31 Sweet & Savory Apple Recipes To Make This Fall