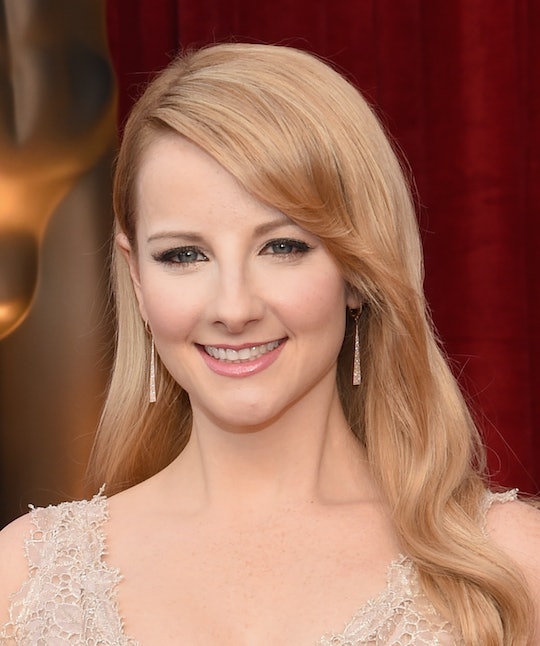 Miscarriage and stillbirth are traumatic losses that many couples grieve in silence. Whether it's because of shame, fear of judgement, or simply not wanting to make others feel awkward, those who have lived through this kind of loss often feel like it's a taboo subject. Just in time for Pregnancy and Infant Loss Awareness Month, a powerhouse group of celebrities created this powerful PSA on pregnancy loss and it's exactly what those touched by miscarriage and stillbirth need to hear.

Melissa Rauch, who plays the super smart, sassy, and lovable Bernadette on the hit TV series The Big Bang Theory, has spoken out about her miscarriage before. In a heartfelt essay published by Glamour in July, Rauch simultaneously revealed her current pregnancy and her past miscarriage. And now, with the support of her celebrity friends, she has helped create something truly moving.

"We don't talk about prenatal loss nearly as much as we should," Rauch says at the beginning of the PSA, published through Glamour on Monday. More celebrities continue:

"It's me," each of the women says in succession.

"I had a miscarriage," the voices echo one another, with some of the women saying they had two, three, five and even six miscarriages.

Depression. Excruciating heartache. Feeling like a failure. Shame. Trying (and failing) to bounce back right away. These are just some of the inner battles the women in this video faced following their losses. For many, opening up about these feelings has proven to be helpful.

Prefacing the PSA on Monday, Rauch offered insight into how incredibly therapeutic it has been to reach out and talk about her miscarriage with others who have experienced pregnancy loss. "I am in tremendous awe of each of the women who joined me in making this video," she wrote, according to Glamour. "They opened my eyes to the possibilities of what could happen if we lived in a world where this issue was spoken about more freely." She continued:

Perhaps we wouldn’t be so hard on ourselves or feel so isolated while going through the agonizing grief and devastation that so many of us encounter on the road to motherhood. My heart is forever changed by the tonic of their voices. These powerful, brave, compassionate, strong, badass ladies represent the millions out there who are a part of this sisterhood.

I think the way each woman looks into the camera and addresses those who have experienced a pregnancy loss is what makes this PSA especially powerful. Now, I'm not usually a crier, but this part really got to me:

If you're going through this now, please know you did nothing wrong... You are not alone... Not for one second. It's not your fault. It's OK to not be OK right now.

I desperately needed to hear all of this in February of 2013, when my second pregnancy ended in miscarriage. I found out I was expecting baby number two and less than two weeks later, I started bleeding. A trip to the ER confirmed what I already knew: my dreams for that second child were shattered. It was a surreal experience for me. Although, before it happened, I was aware miscarriages were fairly common, I had no idea how many women pregnancy loss actually affects. Suddenly, I was a statistic. I am the one in four.

The PSA wraps up by, again, encouraging those affected by pregnancy loss to not suffer in silence. The women say:

I think it's incredibly brave to be vulnerable and raw. And this is something that I would love to drag out of the shadows and into the light. There are so many women out there who are going through what you're going through. So why in the hell are we all suffering in silence? Reach out and talk to someone. It matters. You are brave. You are strong. And I am holding you in my heart.

Thank you to everyone who took part in creating this moving PSA, for shedding light on this important subject. It's exactly what so many of us needed to hear.