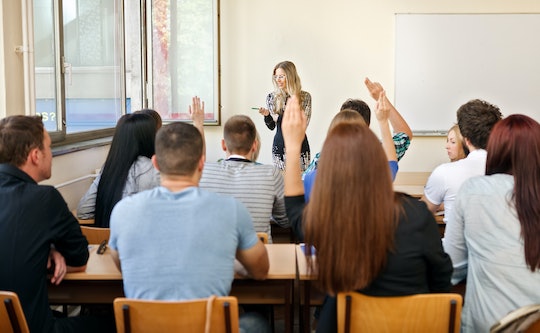 Any person who has menstruated while in class knows how stressful that can be. Worrying if you have enough product to last eight hours or if you'll end up leaking through can occupy 95 percent of your mind during the school day. What shouldn't concern you, though, is whether or not you'll be able to go to the restroom in order to change your pad or tampon. But that's exactly what's happen in one charter school system: Chicago students say they are are bleeding through their pants because of their school's bathroom policy, and both teachers and kids are speaking out.

Menstruating students at the Noble Network of Charter Schools, which serves 12,000 kids at 18 campuses, say that, per the network's strict bathroom policy, they have to have an escort follow them to the restroom if they need to use it during class, according to NPR. But the students allege the escorts rarely show up, which means that some students end up leaking through their menstrual products — and, therefore, bleeding through their uniform slacks — while sitting in class, the students told NPR, because menstrual products can hold but so much blood.

Romper reached out to the Noble Network of Charter Schools for comment, but did not hear back in time for publication.

The bathroom escorts work similar to a hall pass, a spokesperson for Noble Network of Charter Schools told Huffington Post. But in one text to an NPR reporter, a student said, according to Huffington Post:

We have [bathroom] escorts, and they rarely come so we end up walking out [of class] and that gets us in trouble. But who wants to walk around knowing there’s blood on them? It can still stain the seats. They just need to be more understanding.

Constance Jones Brewer, president of the Noble Network of Charter Schools, told HuffPost in a statement that the Noble system was being criticized as part of the "'unfortunate political and emotional debate' around charter schools." Brewer added, according to HuffPost:

Let me be clear - Noble absolutely accommodates our students during menstruation, including bathroom trips whenever the student needs one. This is the same accommodation as high schools everywhere, and I would tolerate nothing less from my organization. We love our students and it is our sacred responsibility to ensure their health and safety. We also know that stains are still not 100 percent preventable for factors that are private to each student, but when they happen, our schools provide supportive solutions as quickly as possible.

Such a bathroom policy, which teachers and students at the Noble Network called "dehumanizing," according to NPR, is not particularly surprising, considering that many menstruating students across the country either have a lack of access to hygiene products in school or have to deal with faculty who won't let them go to the bathroom.

In New York City, for example, thousands of menstruating students reported having to go through a complicated and frustrating process just to get a pad or tampon, according to the Gotham Gazette. Students also reported that teachers would often deny their requests to go to the bathroom because they didn't view needing to change your pad or tampon as a necessary emergency, Gotham Gazette reported.

This prompted New York City Councilwoman Julissa Ferreras-Copeland to introduce legislation that would make pads free and accessible in public schools, as well as in homeless shelters and correctional facilities, which went into effect in 2016, according to HuffPost. The state followed suit this year, Scary Mommy reported.

Students who menstruate should not have to worry about whether they can go to the bathroom in order to change a tampon or pad. Not only is unnecessary, it can have a negative impact on their academic success. If school administrators really care about students, they wouldn't continue to treat periods as "icky" things that don't happen.