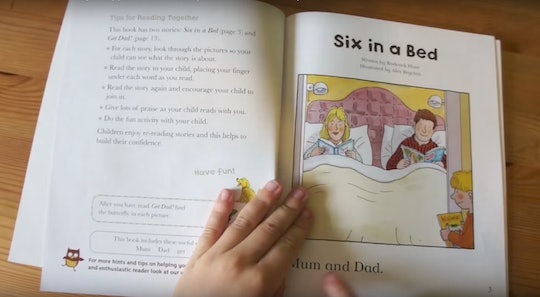 Children's books, with their wholesome storylines and happy endings, are essentials for any family with a kid learning how to read. But, let's just admit it, those repetitive bedtime stories can get pretty freakin' boring for moms who'd rather be reading something by Roxane Gay or catching up on The Good Place. Well, one series for 3- to 7-year-olds popular in the United Kingdom has pinpointed a way to keep parents and kids entertained. It's pretty simple: These children's books contain some majorly NSFW references, and you definitely don't want to miss them.

The books in question are the Biff, Chip and Kipper series written by Roderick Hunt and illustrated by Alex Brychta. And almost all kids in the United Kingdom have read these books at some point, which means most of their parents have as well. You see, the Biff, Chip and Kipper books are part of the reading scheme Oxford Reading Tree, which is taught in more than 80 percent of primary schools there.

But it turns out that enthusiastic kids who have read all these books may have been exposed to some... adult content in the process. On Sunday, Twitter user Ed Brody tweeted photos of two pages of a book from the series — and what's actually going on beyond the plot is not exactly subtle.

In the first shot, a character named Wilma walks through a park while three men congregate near a bush behind her. By the next page, the trio has ostensibly migrated behind the bush and an old lady appears shocked and appalled by what she sees them doing there.

"Somewhat dubious scenes spotted in the background of a friend's 4yo's school book," Brody captioned the situation he spotted playing out on the pages.

That makes the fact that the practice has infiltrated a children's book dramatically less amusing, honestly.

And Ed Brody's discovery led another adult who's been subjected to the Biff, Chip and Kipper books to reply with one of his own. This time, Twitter user Dan Higham shared an initially innocent-looking illustration of kids playing in a classroom. Upon closer inspection, it's clear the letters on the stacked blocks one child is playing with spell out "hepatitis," as in the sexually transmitted disease. "That series of books had an illustrator who like to put stuff like that in them," Higham wrote. "I found this one a long time ago... See it?"

Inserting references like this into children's books is certain to keep parents on their toes — and a bit more engaged with the material. Now that the jig has been exposed on social media, though, it's unclear whether moms, dads, and educators as a whole will think of this beloved series, but let's hope it just makes them love it even more.