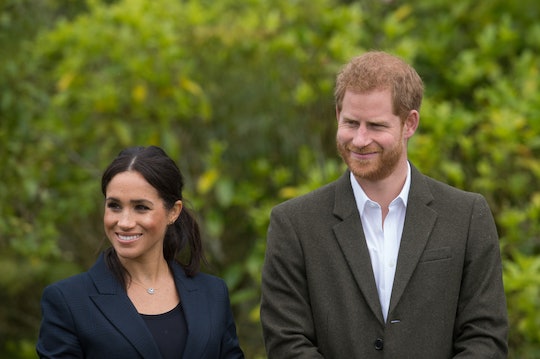 Back in January 2019, the Duchess of Sussex had reportedly told a well-wisher that she was six months pregnant, and royal fans quickly determined that her due date must be in late April or early May. Now, as Baby Sussex's arrival draws near, these new clues about Meghan Markle’s due date provide some strong hints that her and Prince Harry's first child will be here very, very soon.

The first clue comes via Prince Charles and his wife Camilla Parker-Bowles, who have announced a scheduled trip to Germany on May 7, according to People. It will be a short, three-day visit that is intended to bolster international relations between the two countries.

Since this will be their fourth royal grandchild, as People noted, it’s assumable that the couple are planning to be close at hand for the birth, which would put the due date sometime at the end of April. One could speculate that Markle's due date could also be in mid-May, depending on how far she was into her sixth month when she made that comment, but let’s just go with April. It’s more fun to think that the royal baby will be here any day.

Backing up an April due date theory is an announcement by Markle’s longtime friend and makeup artist, Daniel Martin, as The Daily Express reported.

In an Instagram post, Martin told his followers that he’ll be appearing at New York City’s Makeup Show on May 5. Since Martin has been spotted in London recently, it’s thought that he is there to help the duchess with her post-baby makeup, according to The Daily Express. After all, he was the pro that she turned to for her wedding look, according to ELLE, so it’s not hard to imagine she would call on him for a similar, natural look when/ if she makes her appearance following the delivery.

Markle herself confirmed that the delivery should be any day while speaking to the Welsh Secretary of State, Alun Cairns, earlier in April. The Independent reported that Cairns asked Markle how things were progressing and she replied, “It’s actually very sweet. It’s a nurturing thing to ask. We’re nearly there!”

Markle and Prince Harry have sought to maintain a bit of private life away from the limelight, a philosophy they have carried through the pregnancy. According to Town & Country, it’s thought that she’ll deliver the baby at Frimley Park Hospital outside of London, which might provide a speck more privacy than Kate Middleton and Prince William have had with their babies, born in London.

Royal expert Christine Ross, however, believes the couple won’t be able to maintain that solitude for long. In fact, she told the CBC that she think they'll have to announce the birth within hours of the baby’s arrival.

“When you think about it, no matter who is there, the midwives might mention it to their husbands who tells their friend at football practice whose cousin happens to be a Daily Mail reporter and then it’s everywhere,” Ross told the CBC. “They really know that they don’t have a ton of time to keep this to themselves because you never know what sort of comments, what sort of signal is going to let the world know ‘oh, actually, this has happened'."

I’m sure we’ll feel the Earth shift on its axis when Baby Sussex finally arrives, so the couple shouldn’t have to say too much at all. But hopefully they do get to enjoy some precious time to themselves as they welcome their beloved firstborn to the family.