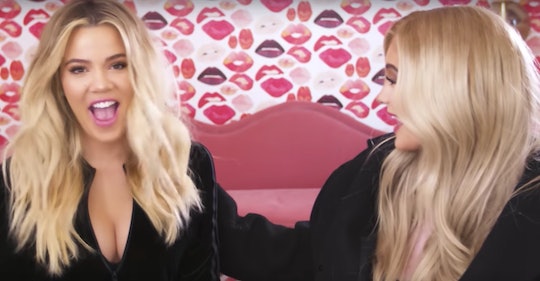 These "Clues" From 'KUWTK' About Khloé & Kylie's Pregnancies Are Pretty Convincing

If there's one family in the world capable of transfixing the entirety of the globe, it's the Kardashian-Jenner clan. Ever since news broke that not one, not two, but three members of the family were reportedly expecting children, there has been absolutely no chill surrounding anything they do. And honestly, with all these "clues" from Keeping Up With The Kardashians about Khloé Kardashian and Kylie Jenner's rumored pregnancies, who could blame all the fans?

In September, it was announced that Kylie was allegedly pregnant, and not long after, news that her sister, Khloé, was also reportedly expecting, broke as well. And while neither sister has confirmed (or denied) the news, fans have been nonstop analyzing just about everything they say and do. Seriously, Kylie's Snapchat account has probably seen so many screenshots in the last few months, because even a photo of the beauty mogul holding a few phone cases has made the national news. And she isn't the only one, fans have also been watching Khloé's every move to see if there was even just a smidgen of a hint or clue that she's actually pregnant. Because even though Khloé and Kylie's sister, Kim, has already confirmed that she and husband Kanye West are expecting their third child via surrogate, the world still awaits news from the other two sisters.

Here are all the "clues" from KUWTK that Khloé and Kylie may actually confirm their rumored pregnancies on the show.

The KUWTK midseason finale on Sunday promises to bring plenty of drama in and of itself, but it's the teaser "Still to Come" trailer that has everyone talking. Per AOL, "The clip begins with Khloe's loved ones sitting at a fancy table with shocked, happy expressions." And while the conversation isn't exactly coherent, it's clear that some sort of happy news is being delivered, as there are plenty of hugs to go around.

Obviously, it's unclear just what was beind discussed, but it seems fairly likely that the new year could bring about some pregnancy confirmations, at least on Khloe's end.

During the KUWTK holiday special (which was reportedly filmed in October), the family gathered around to say what their thankful for. And according to Refinery 29, Kylie gave a very sweet speech about her mom, Kris Jenner. After Kylie stopped talking, Kris opened up, and some are saying that her own sweet words might have actually been a pregnancy confirmation as well. Per Refinery 29, Kris said:

I used to pray that one of you guys would have a baby. And now it’s like a faucet that we turned on and that won’t turn off.

Now, while she could very well be referring to Kim and Kourtney, who have a total of five kids (and counting), fans seem to think this may not be the case.

There's A *Chance* It Could Happen Sooner Than We Think

Of course, neither Khloé nor Kylie has even so much as mentioned their rumored pregnancies on the show this season, but that could all change Sunday night. According to a source who spoke to Hollywood Life:

Both Khloe and Kylie will be revealing their pregnancies on the Keeping Up With The Kardashians mid-season finale. They’ll be teasing the news on promos for the finale that will be released during the week before it airs, and Kris is hoping it will make for record breaking viewing figures.

Obviously, it's totally up to Khloé and Kylie to choose how they wish to confirm or debunk their respective pregnancy rumors. But it's also pretty safe to say that fans are jittery with the anticipation that it could happen very soon.