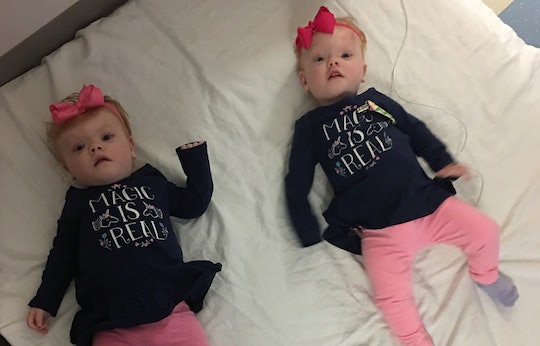 Courtesy of the Children's Hospital of Philadelphia

The last 15 months have been a whirlwind of emotions for Heather and Riley Delaney. The couple from North Carolina has been separated from their little ones since they were born. But the new parents received good news in time for Thanksgiving: Their once-conjoined twins finally get to go home.

According to the Washington Post, 15-month-old twins Erin and Abby Delaney had been discharged from the Children's Hospital of Philadelphia (CHOP) on Monday five months after undergoing a rare separation surgery. The infant girls, who've returned to their home in Mooresville, North Carolina, have lived in the hospital since they were born in the summer of 2016 — in total, 485 days, the Post reported.

Mom Heather said in a statement released by CHOP that she and Riley are "grateful for the care" their little girls received from their 30-member medical team. "[We're] so excited to take them home — just in time for the holidays," Heather said.

The girls are inspiring. As their parents, it is very neat for Riley and me to have a front-row seat to this and watch them overcome these incredible obstacles. We cannot wait to see what their future holds!

Abby and Erin Delaney were born via C-section on July 24 of last year, 10 weeks premature, according to ABC News. They were joined at the head, a condition known as craniopagus, one of the least common forms of being conjoined, according to CHOP. Nearly a year later, a multidisciplinary team of surgeons and medical staff performed a rare, 11-hour surgery to separate the twins when they were 10 months old, ABC News reported. Abby and Erin spent the last five months recovering from the procedure.

Plastic surgeon Jesse Taylor said of the surgery, according to a CHOP press release from June,

Separating conjoined twins is a very complex surgery followed by a long and complicated recovery, but we are very hopeful for a positive outcome.

Abby and Erin Delaney have seen tremendous progress since their surgery in June, according to an Oct. 22 update released by CHOP. As of last month, the formerly conjoined pair could sit independently of one another, practice rolling over and crawling, and could be held separately in their parents' arms. Taylor had said of their progress,

This is one of the earliest separations of craniopagus conjoined twins ever recorded. We know that children heal better and faster the younger they are, therefore our goal for Erin and Abby was separation as soon as possible with minimum number of surgeries.

According to CHOP, Abby and Erin Delaney will need additional surgeries during their life. The hospital medical staff will also continue to monitor the two girls as they age. And mom Heather said that she couldn't be more thankful for such a caring and attentive team that has become "like a family."

She said of the CHOP team and her daughters' progress, according to the Oct. 22 statement,

Although this has been a long journey, with many ups and downs, Riley and I are thrilled to see how well the girls are doing today. We are so grateful for the Children’s Hospital of Philadelphia team, and for the support and encouragement that our families, our friends and the community have given us during this long journey.