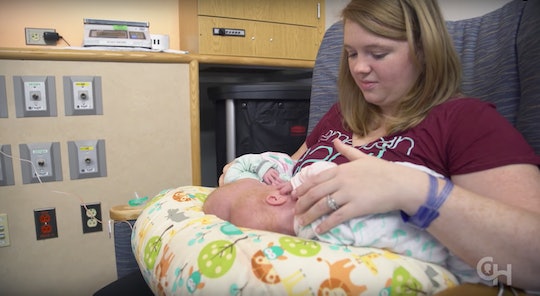 The Children's Hospital of Philadelphia/YouTube

These Once-Conjoined Twin Girls Are Thriving After Separation Surgery

Many parents track and celebrate the milestones their babies and toddlers reach — from holding their heads up on their own to talking to walking. And for Heather and Riley Delaney, every sign of progress the 15-month-old daughters, Erin and Abby Delaney, show is an extra special victory, because the conjoined twins recently underwent separation surgery. It was a risky operation with a long (and ongoing) recovery period with scary setbacks and incredible strides. Four months after the marathon 11-hour surgery at Children's Hospital of Philadelphia (CHOP), according to CBS News, Erin has been released from the hospital, but Abbey remains hospitalized right now, and the girls' parents hope that the entire family will be able to return to their native North Carolina in time to celebrate Thanksgiving.

And, if that does indeed turn out to be a reality, they would have a lot to be thankful for. Actually, they already do, because both Erin and Abby are reportedly reaching developmental milestones and impressing their doctors with their progress, as CHOP pediatrician J. Michael King recently told Philly.com:

What parents really want to know is that crystal-ball question about the future outlook. But what we look at is functioning. Both girls are making gains. They're engaging, and looking around, and knowing faces, and babbling. I have high hopes for them.

According to Philly.com, Erin and Abby were born 10 weeks premature on July 24, 2016. Their parents had learned that they were expecting conjoined twins when Heather Delaney was just 11 weeks pregnant, ABC News reported, and she moved from her home of Mooresville, North Carolina, into a special maternity ward at CHOP at 27 weeks so that she could be monitored.

Doctors began working on a plan to separate the twins, who were conjoined at tops of their heads, and a team of 30 medical professionals performed the surgery in June 2017, according to ABC News. Although CHOP surgeons had performed 22 separations of conjoined twins in the past six decades, as the hospital said in a statement, Erin and Abby were the first "craniopagus pair," or twins joined at the head, that CHOP had encountered.

It was a risky surgery, but one that the twins' parents were determined to have done in order to give their daughters the most normal lives possible. Because they've been separated and are, by all accounts, thriving, the girls' chances of doing just that are much better than they were. Doctors will have a better idea of what kinds of deficits they may have around the time of their third birthday, according to Tech Times.

While doctors and the girls' parents are hopeful about their future, the road to getting here was long: In the long months of recovery after the surgery, there were times when Erin would stop breathing and her heart rate would drop, according to The Washington Post, or that Abby's brain would bleed and cause her to shake.

There were so many such moments that proved terrifying. One was when Abby required an emergency post-surgery re-intubation, as Heather wrote on her blog:

I stood in the back of the room and watched, cried, and prayed. Feeling helpless was the new normal and I hated it. I wanted to do something, anything but I couldn't. And the worst part is everyone keeps asking if you are ok. Thats when you know things aren't good. When you have person after person asking if you're ok, if they can get you anything, trying to hug you or pat you on the back to offer some support. It's moments like that were you just want everyone to go away and leave you alone. All you want to do is will your child to get better because that is all you can do.

Both Erin and Abby are getting regular physical, occupational, and speech therapy, and will need another surgery in the future to have skull bone replaced, where it is currently missing and covered with a patches. But their progress and resilience is nevertheless remarkable.