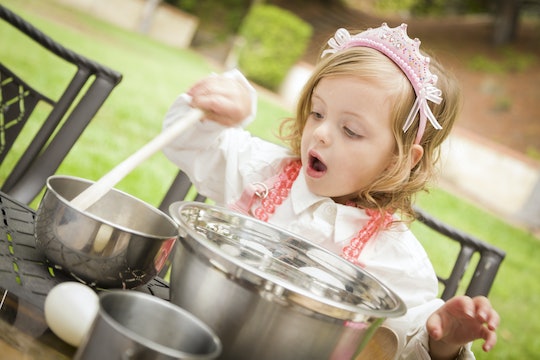 These Recipes Written By Preschoolers Are Ridiculous, Hilarious, & Kinda Perfect

Sometimes scrolling through your Twitter feed can feel like a real bummer. There's an awful lot of nasty political commentary and negative trolling going on. And yet, sometimes you stumble upon something that's so pure, so uplifting, you can't help but smile. When I saw Jordan Adam's post about his nephew Ethan's preschool cookbook, I had to give it a look. I'm so glad I did because these recipes from preschoolers will seriously make your day. If you've lost faith in humanity, all you need to do is a take a look at what these tots have cooking, and your hope will be restored.

I have a preschool-aged daughter who loves to help me in the kitchen. She likes dumping in the spices and licking the bowl, naturally. But I know that if she was the one creating the recipes, we'd end up with a bowl full of sugar, chocolate chips, milk, and all of the sprinkles. From perusing Ethan's class cookbook, it seems like she'd be best buds with Ethan himself, who was the mastermind behind "Ethan's Eggs." It turns out you don't need eggs for this genius recipe, just pancakes, sugar, and sprinkles! And if you're thinking of heading to the grocery store to stock up on these key ingredients, slow your roll. According to Ethan, the best place to buy them is none other than the Texas Roadhouse, though you can go to his house for the "eggs" you won't need anyway.

If you read through the recipe for Ariana's Macaroni, you'll quickly realize that this little girl really thinks outside the box. Who said recipes need to be limited to edible ingredients anyway? To make her mouthwatering mac n' cheese, you'll need toys, a backpack and a doll! Another gem of hers comes from her detailed cooking instructions, which reveals that she's got a party to go to and that her sister sure does ask a lot of questions.

"The oven has to be hot like fire…like a candle…like for birthdays. Now you need to tell everyone that its time to leave. And I have to leave because I am going to a party with a swimming pool. My sister says, 'Why do you go to the swimming pool?' and I say, 'Because I like it.' Now I go home and I am waiting for it not to be hot and then my sister says, 'Why do you do that?' it’s because you blow on the macaroni so it wont be hot. You need to wait. Now its done!" explained Ariana.

Next up in the cookbook is Joe's Tacos, but his heart really isn't in this one. No, no, poor Joe just wants to make cheesy roll ups or better yet, watermelon. And don't get him started on things like serving size or cost. "I don't even know," little Joe admitted.

Last but certainly not least you get to Sebastian's Pancakes, and while this recipe costs a whopping $70 to make, it only calls for one (very pricey) ingredient — salt. You also have to be very careful when cooking these pancakes. "You get a thingy from the house and you put it in the hot thingy. Turn on the hot thingy and it burns so you have to be careful. You make like, something and you put it in it and it cooks. Then you get a plate and finish it. Don't leave the plate on the table, you have to throw it away in the sink or the flies with get on it," advised Sebastian.

These hilarious recipes reveal so much about the pint-size chef's creating them. I can't stop laughing at the inventive ingredients they chose and the specific instructions they included‚ and it looks like I'm not the only one utterly delighted by Adam's tweet. It has been retweeted 73,209 times and liked 179,562 just at the time this story was published. Looks like a lot of people are getting ideas on what they will — or won't — be making for dinner tonight.