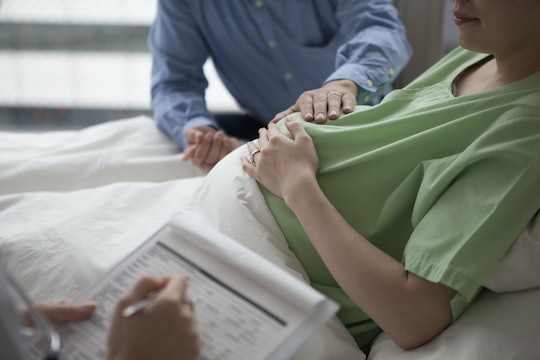 Despite medical advancements over the last few decades, there's still a long way to go when it comes to improving maternal health in the United States. The maternal death rate continues to climb, particularly among mothers of color, and the number complications from pregnancy and labor is still significantly high. In an effort to tackle the issue, these doctors in Texas are using plastic moms and fake blood to improve maternal health outcomes. Talk about innovative science.

At the University of Texas Health Science Center at San Antonio, Dr. Sarah Page-Ramsey and nurse Marisol Breton-Leija use life-sized plastic dolls and a mix of corn syrup and food coloring to help train medical practitioners for real emergencies they may encounter in the hospital, according to The Texas Health Journal. Under Page-Ramsey and Breton-Leija's attentive eye, the nurses and doctors training at University Hospital, UT Health San Antonio's primary teaching hospital, run through simulated obstetrics emergencies, such as hemorrhaging during labor, using a NOELLE Maternal Care Patient Simulator, designed by Gaumard Scientific, a simulator manufacturer and supplier. The medical students interact with the robotic doll as if they're a flesh-and-blood patient, and treat the doll in the exact same way they would on the floor of the emergency room, The Texas Health Journal reported.

At the end of a drill, Page-Ramsey, Breton-Leija, and the students will debrief, going through all of the positives of the simulation, as well as those parts that need to be improved for next time, according to The Texas Health Journal. They will discuss everything from communication between the staff to scrutinizing the amount of dosages given to the "patient."

Page-Ramsey said that the simulation drills are "all driven towards improving patient outcomes," according to The Texas Health Journal. A study published in the Obstetrics & Gynecology in 2016 found that maternal death rates are on the rise in the United States. To be exact: The U.S. Centers for Disease Control and Prevention estimates that about 700 women in the United States die from pregnancy- or childbirth-related complications every year — a rate that's three to four times higher for Black women in the United States.

Of course, Page-Ramsey acknowledged that these simulation drills won't solve the maternal mortality rates on their own, The Texas Health Journal reported. But, she said, they will help prepare nurses and doctors, some of whom will work in rural hospitals with less resources, to deal with the very real challenges they will face during a labor. And ultimately, the simulation scenarios are meant to help medical practitioners feel empowered and confident in emergency situations so that they're able to prevent tragedy, according to The Texas Health Journal.

That's why all of the simulation drills take place where they would happen in real-life: The emergency room. Although UT Health San Antonio does have a simulation center, running the drills on the floor of the Women's Emergency Center makes the training more true to life, she told The Texas Health Journal.

Our main goal is to practice these scenarios in the setting where they’re most likely to occur, so we really prefer to practice on the floor. That way the team is practicing more realistically. They’re actually going to pull medication from where it’s stored, for example. That lets our team experience the actual process, and it helps us identify obstacles early.