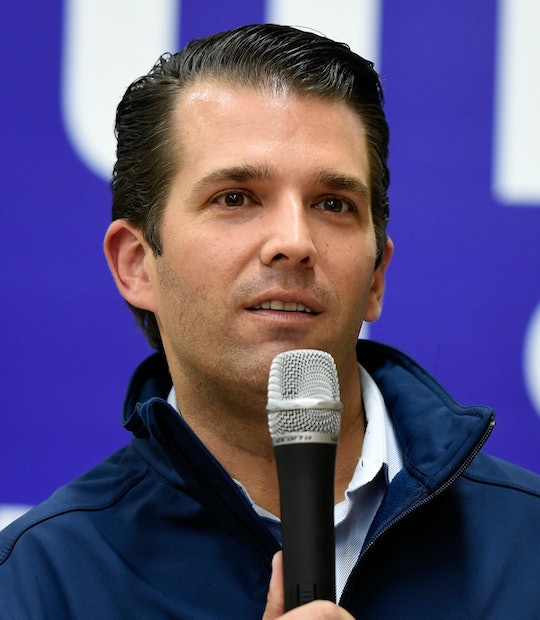 Comparing the Trump family to the Bluths in Arrested Development is nothing new, but recent, baffling missteps have drawn even more parallels between the wealthy casts of characters. Donald Trump Jr. and Gob Bluth jokes, especially, have been everywhere because people can’t help but highlight how alike the eldest children are, even if one of them is fictional. Spewing covert information that could incriminate the father you’re attempting to defend is textbook Bluth behavior, and Trump Jr.’s most recent tweets may have done just that.

Here’s why what Trump Jr. did was so careless. The New York Times reported on Tuesday that Trump Jr. had been in talks with Russian officials to obtain potentially damaging information on then-Democratic candidate Hillary Clinton, all provided by Russian officials, and Trump Jr. was apparently eager to meet up. “I love it,” he’d replied in a June 2016 email to Rob Goldstone, the former reporter and publicist who had offered Trump Jr. the scoop. This exchange is huge, given the alleged ties between the Trump campaign and Russia.

Trump Jr. took it into his own hands to clear the air, and tweeted out the email transcript in question, right before The New York Times released its latest story. This explicit admittance of wanting to work with the Russian government left everyone wondering: Did Trump Jr. confess to a crime? Did he seriously just tweet that he was willing to work with Russian officials, behind the scenes, for his father's benefit?

Beyond this mistake, Trump Jr. has acted Bluth-like in the past. Both Trump Jr. and Bluth (portrayed by Will Arnett in the show) hang on to their father’s every word, attempting to provide back-up where it’s often not needed. And, let’s be real: The juxtaposition all probably started with looks. Trump Jr. and Will Arnett have strikingly similar hairlines, complexions, and are basically the same height. Also, they both bear their father’s names; Trump Jr. is, well, a “junior,” and Gob actually stands for “George Oscar Bluth,” aka his father’s name.

But once you get below the surface, the comparison gets even more freakishly accurate. Bluth's “illusions” (aka magic tricks) always go awry, messing things up for his family even further. Trump Jr.’s email tweets, then, feel like one of these failed tricks.

Twitter, of course, had a lot to say about the Gob and Trump Jr. connection:

Only time will tell how this newfound evidence will play in the ongoing Russia investigation, spearheaded by former FBI Director Robert Mueller. Plenty will agree, though, that Trump Jr.'s tweets were, in fact, "a huge mistake."