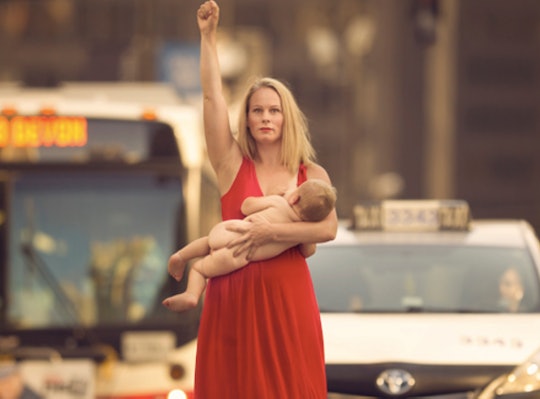 Breastfeeding moms face all sorts of hassles just trying to feed their kids. Whether they're looking for an acceptable spot that's not the bathroom, or trying to explain that there really isn't anything dirty or sexy about using their bodies as intended, there's no shortage of pitfalls and hurdles for moms and their breastfeeding babies. But one talented photographer took these dream-like photos to help de-stigmatize breastfeeding and show how beautiful it really is. And it's making an important social statement on behalf of moms and kids everywhere.

The series of photos taken by Ivette Ivens has been made into a photo book titled, Breastfeeding Goddesses. "Breastfeeding can be messy, uncomfortable, and even painful at times, but the mother’s inner consciousness tells another story," Ivens wrote about the project on her website. "The images in this book depict the way each woman feels while nursing: pure, beautiful, saintly, celestial. She is a beauty in an ancient mural. A powerful miracle in the snow. A golden ray on the shore. A Breastfeeding Goddess."

Ivens has to sons of her own, who are 2 and 5 years old. It was her own experience with breastfeeding that inspired her to capture these fairy tale photos of women in all of their glory breastfeeding their babies.

"I realized how divine and powerful a woman is, and I had to capture it with my camera,” she told The Huffington Post.

That's a lot of babies and a lot of breastfeeding mothers. If this is something that many women are doing, how can it still be considered so taboo?

Promoting breast feeding isn't just a way to make mothers feel more comfortable. According to The World Health Organization, if every baby was breast fed within an hour of birth and continued to be breast fed until 2-years-old, about 800,000 lives would be saved every year.

And it's up to everyone to help encourage women to breastfeed their babies. The United States Surgeon General has called for increased support for breastfeeding mothers, according to the U.S. National Library of Science, after a 2001 survey found that only 43 percent of American adults think it's a woman's right to breastfeed in a public place. Ridiculous.

Working mothers often have no choice but to rely on formula, since there is such little support in the professional world for women juggling a job and a breastfeeding infant at home. Only 57 percent of mothers with newborns are in the labor force, according to the Wall Street Journal. Just a few workplace tweaks like a room for pumping and a designated breast milk fridge could go a long way to boosting new mothers' earning prospects.

Photos like these aren't just beautiful works of art — destigmatizing breastfeeding is an important step forward for mothers and babies.

It's up to everyone, men and women, to come together to encourage breastfeeding and do whatever we can to strip away the stigmas that are making feeding children more difficult than it needs to be. Ivens and her gorgeous models are certainly doing their part for the cause with these incredible photos.

Let's hope every breastfeeding woman out there starts to see themselves as the goddesses Ivens knows they really are. To see more of Ivens' photos, check out her Facebook page or her Instagram page.