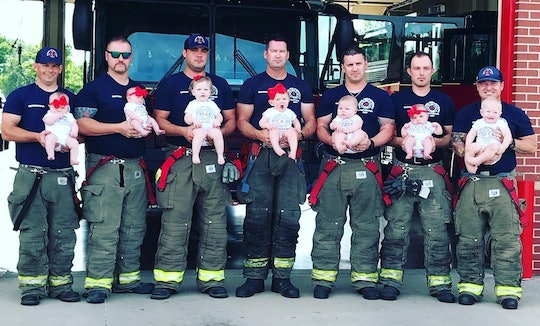 The internet can be a real bummer these days, but luckily, the perfect storm of meme-worthy ingredients — cute babies, hot dudes, and a touching story of friendship — has come along to pick us up. These firefighters who had babies within months of each other posed for a sweet photo shoot with their infants, and just like that, I feel whole again. Seven firefighters from Glenpool, Oklahoma's Station 1 all expanded their broods over the last year, according to the New York Post, and on Sunday, their wives corralled the group outside the station for a "fire family" photo that's too good to miss.

"Something is in the water at the Glenpool Fire Station!" read the Facebook caption written by Melanie Todd, wife of firefighter Dusty Todd. "Honestly, it was difficult to get seven babies to cooperate for a picture, so we all had some good laughs," she told CBS News. She said that once the women came up with the idea for the photos, they patiently waited for the last baby to be born and camera-ready. "After we saw the final pictures, we were excited," she added. "We're a really close group so we were glad we took the time to capture the babies with their daddies. Now we just look forward to seeing them all grow up together."

The photo features five girls and two boys — Jovie, Cohen, Saylor, Bodie, Henley, Kadance, and Gracie — whose ages range from 4 weeks to 15 months old. If you're wondering just how big the department is, there are only 13 more Glenpool firefighters who don't currently have a new baby, meaning more than one-third of their families are all synced up. But the timing was just a coincidence, new dad Mick Whitney told CBS News. "We all just happen to have kids right under a year," he said. "It's a pretty neat deal."

"We're all young adults and just in that phase of our lives," Todd told Yahoo. You may have experienced a similar baby boom within your group of friends, and Whitney told CBS News that the seven men aren't just coworkers. "All the guys and wives spend time in the station and outside of the station. It's a little different in our group. We go out fishing, hanging out. It's a unique dynamic." I imagine those fishing trips will be a little less frequent for the time being, though, and those group hangs quite a bit noisier. Of course, once the babies are all old enough to play together, that'll make for some epic cookouts.

Alyssa Shank, another firefighter wife, echoed Whitney's sentiments when speaking with Yahoo. "We go through life together and know we can lean on each other," she said. "We had no idea our cute little fire family photo would have gone viral like it has. We are happy to bring some warmth and sweetness to people's news feed during a time when you see so much negativity in the news."

She points to the unique aspects of the dads' jobs as one of the reasons they're all so close. "As a fire wife, we know if something happened to one of our husbands, these guys and these families would step up and be there in a heartbeat," she explained to Yahoo. "They are heroes in our town, and heroes in our homes." The idea that one of these families could lose a husband and father in the line of duty is tragic, but it's so heartwarming to know that in an instant, six more would step up to lend a hand. You couldn't ask for a better group of coworkers, or friends, than that.