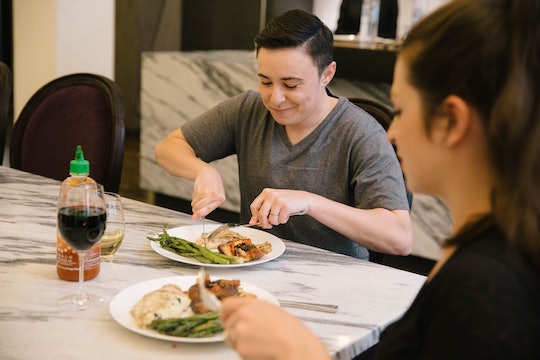 These 7 Foods That Could Potentially Contain Listeria Might Surprise You

I have an untold amount of fear about foodborne illness. It all began when I was around 15 years old and my mom took me out to eat at a new pub. I had a delicious fried portobello mushroom sandwich and french fries. A few hours later, the meal and I met again. And again. I think I encountered every food I'd ever eaten over the course of two days. One of the chief contaminants that causes food poisoning like the hell I experienced is listeria, and it's everywhere. Seriously, there are some surprising foods that can contain listeria and it will freak you out a bit. But to be forewarned is to be forearmed.

Listeria monocytogene is a dangerous bacteria. Most often found in refrigerated food, it's particularly insidious because it's absolutely everywhere since it's a bacteria found in human and animal waste, as per the Food and Drug Administration (FDA). We use animal waste to grow our crops, and you might be surprised how much human waste contamination exists everywhere. It also continues to grow in cold environments, unlike many other bacteria. While it can be deadly to anyone, it's of particular danger to elderly people, young children, pregnant women, and other vulnerable people in the population.

The foods that are most often associated with listeria are many and varied, and while it's impossible to avoid risk entirely, you can minimize your exposure.

More Like This
10 Dreamy Summer Popsicles To Indulge In Stat
Banana Boat Sunscreen Has Recalled Products That Were Found To Contain Benzene
How To Avoid & Treat Lyme Disease
Can You Have Sex With Placenta Previa? Experts Explain