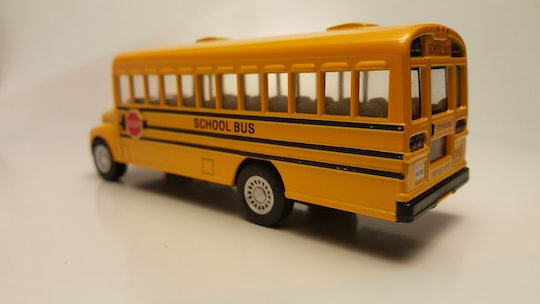 A back-to-school story for the beginning of the fall season that will warm your heart involves two little girls named Rosie and Ruby who might be miracles. The twin girls from the United Kingdom, who were given just a 20 percent chance of survival when they were born, are starting school this week. Now 4-years-old, these former conjoined twins are inspiring thousands with their back-to-school photos.

Rosie and Ruby Formosa were born conjoined at the abdomen in 2012 at the University College of London Hospital, but quickly transferred to the Great Ormond Street Hospital in East London for the emergency surgery required to separate them, according to The Guardian. Doctors told their mom, Angela, that they may not survive since they were sharing part of their intestines. Now, four years later, the little girls are starting school. "Four years ago it wasn’t in my mind that this would ever happen," mom Angela told The Guardian, "I didn't think I'd ever see their first day of school."

Angela learned that her twin girls were conjoined while she was 16 weeks pregnant, and they were delivered via C-section when she was 34 weeks. She was told, as many parents with conjoined twins are, that the babies may not survive the pregnancy — let alone birth, and let alone the surgery required to separate them. But Rosie and Ruby beat the odds, and now they're 4 years old, healthy, and happy.

"They are very similar, they are very bubbly little girls," Angela told The Guardian."They are very headstrong and very determined, which I knew they were from when they were in my belly because of the way they kept growing and surviving."

Having conjoined twins is a extremely rare, and while many who survive birth are separated, some have gone on to live conjoined for the rest of their lives. In the U.S., Abby and Brittany Hensel, 26, are two of the most well-known conjoined twins alive today.

Scientists don't exactly agree on what causes twins to be born attached in this way, but one theory that's been around for a while now is "fission" — when one egg splits, as it would with twins, but for some reason doesn't split all the way, meaning the twins develop but are attached. Sometimes conjoined twins are attached at the abdomen, the back, at the origin of a limb or even at the head.

Separation, if possible, is usually done shortly after the babies are born to give them the best chance at survival — and living independent lives. But sometimes, to separate twins would mean neither would survive.

The latter is the case for Tatiana and Krista Hogan, 8 — conjoined twins who actually share a brain, meaning that they can never be separated. When they were born, doctors told their parents not to expect them to live a day, but the girls did survive and now live with their parents in British Columbia and have miraculously similar lives to their school mates, despite being conjoined at the head.

Research has found that 75 percent of conjoined twin cases are female.

Given that science still doesn't know a whole lot about why or how conjoined twin's happen, one thing is for sure for Rosie and Ruby as they start their school careers: they'll always have a great story for their health and biology classes as they age.