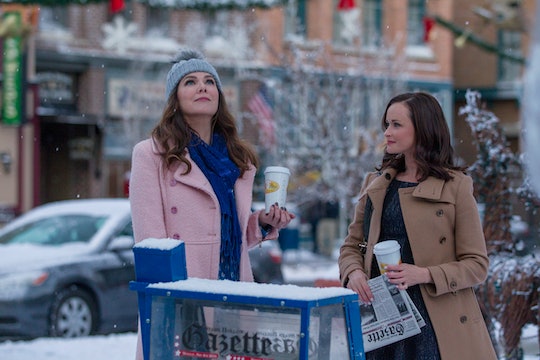 (Warning: This post contains spoilers from Gilmore Girls: A Year in the Life.) For years, Amy Sherman-Palladino left us wondering what those final four words at the end of Gilmore Girls would've been if she'd been able to finish the original series herself. And now that we know what they are ("Mom." "Yeah?" "I'm pregnant."), fans are surprisingly left with more questions than answers. Who's the father of Rory's baby? How does Lorelai feel about it? What is Rory's next step? How far along is she? So, as you can imagine, this has inspired many theories about the Gilmore Girls revival ending to crop up over the course of the last few days, which I'm sure will plague fans for years to come. (That is, unless the series ends up continuing on for a Season 2?)

But that's a hope for another day. For now, I think we should all take some time to try and process Rory's pregnancy news by listing out all of the possible theories surrounding that epic cliffhanger. Fans may never get closure on this reveal and if that's the case, then these predictions are all that we'll ever have. So we might as well make the most of them — and in my mind, here are some of the best options out there regarding who the baby daddy could be...

Logan and Rory had an ongoing affair throughout the majority of the revival series, so he certainly seems like the most likely candidate, especially since they had one final hookup in "Fall." But is that answer too obvious? It's hard to say, but it certainly would make Christopher and Logan share more in common than they already did.

I know, I know, he and Rory didn't appear to be romantically involved in any way throughout the revival. But that doesn't mean it couldn't have happened off-screen. Fans only saw four points in time that occurred throughout the course of a whole year. Who's to say they were up late one night discussing ideas for Rory's book and one thing led to another? I'm just saying, don't completely rule this possibility out.

Rory had her first and only one night stand during the "Spring" episode. And while some could argue that the timing doesn't match up since she doesn't appear to be that far along, that doesn't make it impossible. Late May could still be considered spring and early September could count as fall, then that would make her a little over three months pregnant. She wouldn't necessarily have to be showing much at that point. So the baby daddy could be someone we've never met before. It's like they say — one night is all it takes.

Just kidding. I doubt he and Rory were ever in the same place long enough to consummate anything. Not that anyone would remember it anyways. Poor Paul.

Many viewers (myself included) found it very suspicious that Luke and Lorelai's surrogacy storyline was dropped so suddenly. Why take the limited time the series had at its disposal if nothing was going to become of it. Maybe the subject wasn't dropped after all. One could theorize that Rory is actually pregnant with a surrogate baby either because she's in desperate need or cash or because she's actually carrying Luke and Lorelai's baby.

I know it sounds a bit crazy, especially since Lorelai looked shocked at the news and I'd assume Rory would need her permission in order for this to happen, but still! Can you imagine? Now that would be a twist ending! And Rory did offhandedly say to Jess in "Summer" that she should just become one of Paris' surrogates. Just saying.

It's unclear whether or not the revival will get a second season, but if it doesn't then these theories are bound to haunt our dreams forever. Let the speculations commence!