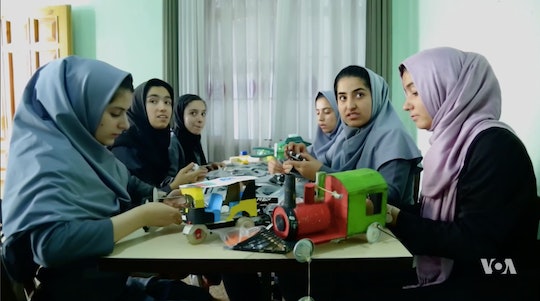 Six teenage girls from Afghanistan have engineered a robot that is set to compete in an international science competition being held in Washington D.C. They overcame a list of challenges to enter the contest and were set to depart for Washington this month. Unfortunately, these girls are missing their science competition for a seriously depressing reason: They couldn't get visas.

The group applied for their one-week travel visas only to be denied their request the first time back in June. After that, they applied again. On Monday, they were notified that they had been denied entry not only once, but twice. Being denied again means that, despite all of their hard work and dedication, the all-girls team will have to watch their robot compete in the FIRST Global Challenge — an international robotics competition held in D.C. —over Skype.

One member of the team, 14-year-old Sumaya Farooqi, told the Associated Press how disheartening it was to hear that they were not going to be allowed to enter the United States to compete:

The six girls have already overcome a wide range of obstacles to enter the competition at all. According to Forbes, they had to convince their families to allow them to compete in the first place. This was no easy task, as Afghanistan is a country known for being opposed to women entering STEM fields.

Once they managed to convince their family members, they had to make the long journey from their hometown of Herat to the capital city of Kabul — a trek of 500 miles. Kabul was the site of a truck bombing in May that killed and injured hundreds of people. The young girls traveled there twice in preparation for the competition.

As if these nearly unsurpassable obstacles weren't enough, they then had their dreams ripped away from them for no apparent reason. As of now, The U.S. State Department has not commented on why the girls were denied. In its coverage of the girls' story, The Washington Post pointed to a U.S. law that assumes anyone applying for a temporary visa intends to remain in the U.S. indefinitely unless they can prove that they have strong enough ties with their home country to compel them to leave. This explanation, however, overlooks the fact that these are young girls with lives and families waiting for them back home.

The girls reportedly explained their intentions to return home to U.S. officials, to no avail. One member of the team, 16-year-old Rodaba Noori, explained her confusion over the rationale for denying the team entry:

Each of us gave them written guarantees from two government employees vouching for our return. We have our life and family here. How could we abandon them?

Fatemah Qaderyan, a 14-year-old member of the team, said in an interview with Reuters that she is optimistic about the performance of the team's creation:

We did our best, and we hope that our robot could get a position along[side] robots from other countries.

Perhaps most interestingly, Afghanistan isn’t even included in President Trump’s travel ban. However, teams coming from three countries that are listed on the ban — Syria, Iran, and Sudan — were all given visas to attend the competition. If there was a valid excuse for excluding these girls, I think we would all like to hear it.