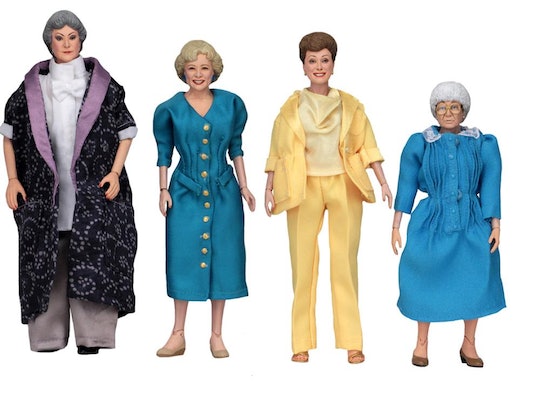 OMG, You Need These Golden Girls Action Figures More Than Cheesecake In Miami

Picture it: Canton, Ohio, 1999. My mom and I are sitting on our hunter green sofa in our paneled living room, lauging at Rose's antics, Blanche's kickass open attitude toward sex, Sophia's undiluted love of violence, and Dorothy's intelligent wit. It was a good time. To this day, I can still quote more Golden Girls than what's probably considered normal and now, I can act them out with toys if I so choose. That's because the folks at Big Bad Toys have designed a set of Golden Girls action figures that they just previewed at Comic Con. Because not all heroes wear capes — some come with cheesecake and were once girls in St. Olaf.

The Golden Girls fandom has seen a resurgence as of late. Viewers the world over who are just completely over it want to return to a time when an unabashedly progressive television show about older women brought in big laughs and big ratings each and every week. Love for the 30-year-old show has inspired everything from the popular Out On The Lanai podcast featuring H. Alan Scott and Kerri Doherty, to extensive spreads in design magazines. Now, thanks to Big Bad Toys, for just over $100 — roughly four cheesecakes — we can have all four ladies in freshly poured resin to sit on our shelves and ostensibly judge everything we do.

They're like the angels on your shoulder, adorned in drapey outfits and ready to call you out on your bull crap.

Too long have action figures been firmly the playthings of the young. Heck, when I was a kid, they were thought of as purely boys' toys. Boys had action figures and girls had dolls. Screw that. My brother's Ninja Turtle action figures were far more sturdy and all their joints moved. That's way cooler than a doll whose foot was always pointed like it was going in a stiletto and couldn't even stand on her own lest her hair and boobs topple her forwards. Now, my daughter has Shuri characters and Okoye action figures, and a collection of Wonder Woman toys that have seen better days. Sure, she has those pointy-toe dolls, too, but Okoye has a spear. Guess who wins.

But these Golden Girls action figures are for all of us. In the current political climate, we need Blanche to give no craps, Rose to tell us all to toot her Vertubenflugen, Dorothy to put us in line, and Sophia to hit us with a wicker purse. The Golden Girls action figures are fun, they're silly, but they're also a reminder that it is possible to use television and comedy to push back against negativity, bigotry, and misogyny, and push forward feminism and love. They tackled everything from gay marriage to suicide to sexually transmitted diseases and sexual harassment long before anyone else was even thinking about making those things an issue.

And they did it all with humor, poise, and copious amounts of the dairy and sugar perfection known as cheesecake. To this day, I can't sit at Junior's here in Brooklyn and have a slice of strawberry cheesecake without thinking of one of the many witticisms of the show. I remember when Blanche's daughter went to a sperm bank, I remember when her brother came out, and Sophia knew just what to say. I remember when Dorothy told off her doctor in the restaurant who made an already scared woman more fearful for her health. Or when Rose kinda killed that one lady that one time.

The point is, these Golden Girls action figures are fun, and they represent something many of us hold dear to our hearts, so I'm sure they're going to fly off the shelves.