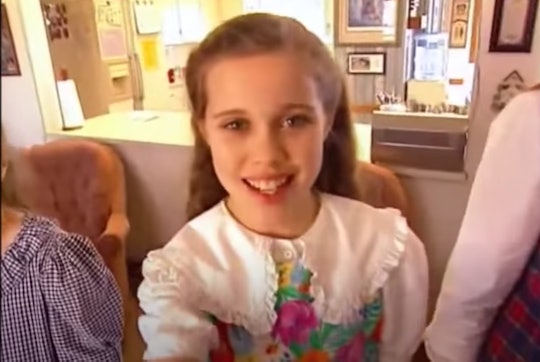 In 2004, the nation was first introduced to Jim Bob and Michelle Duggar and their brood of children — except the Duggar family was considerably smaller back then. The TV movie 14 Children and Pregnant Again! explored the logistics of how the rural, ultra-conservative Christian family from Arkansas raised and homeschooled more than a dozen children. Viewers practically watched the Duggar children grow up before their eyes through their years on 17, 18, and 19 Kids & Counting — and now on Counting On, as the older Duggar children start families of their own. Among the adult siblings who are now parents is a fan favorite, Jessa. And these Jessa Duggar then and now photos will give you a serious case of nostalgia.

If you can't remember the Duggar roll call from the intro to 19 Kids & Counting, Jessa is Michelle and Jim Bob's fifth child and third daughter. Long before her family's reality stardom, Jessa was just a "regular" kid — who happened to be part of an enormous family. (And because of her love for posting throwback photos on Instagram, I can share this moment with you.) Here's a shot of Michelle and newborn Jessa on the day of her birth, Nov. 4, 1994.

Through the years, Jessa has been known for her spunky personality and strong opinions — as evidenced by this photo of her toddler self caught sneaking around in the closet. (And those cheeks!)

For longtime fans of the Duggar family, it's no secret that Jessa and her younger sister, Jinger, have an exceptionally close relationship. And their family photos are definitely a testament to this fact because Jessa and Jinger seem like they've always been two peas in a pod. "I'm really close to all of my sisters, but especially to Jinger," Jess said in a 2015 19 Kids & Counting clip, Us Weekly reported. "We've always just been best of friends."

"Jessa and Jinger have been like this (crosses two fingers) from the time Jinger was born," their mother, Michelle, said in the same clip.

In August 2017, Jessa posted this adorable throwback photo that perfectly illustrates their closeness. (Their outfits! Those bows! It's too perfect.)

For your enjoyment, here are couple of other adorable Jessa/Jinger moments through the years. Warning: Be prepared for some serious cuteness.

This past summer, Jinger shared yet another throwback of herself and Jessa — posing with whom I'm assuming are Jill, Joseph, and Josiah (it's hard to tell when they're all so little!) — in all their 90s garb glory.

The first time viewers even met Jessa was on the TLC special 14 Kids and Pregnant Again. And honestly, I can't get over those outfits! It takes me back to my own childhood ... except this aired in 2004, so the Duggars seem to have been stuck about 10 years behind the times, in terms of fashion.

Fans have watched Jessa evolve from a spunky, organized leader within her family dynamic — as apparent by this video — to a courting young woman.

And here's a shot of their romantic engagement, following a scavenger hunt that led them to this gorgeous chapel, according to Hollywood Life.

Jessa and Ben tied the knot on Nov. 1, 2014, as People reported. Below, you'll see a still shot of Jim Bob "giving her away" before Jessa exchanged vows with Ben.

These days, Jessa is a married mom of two adorable sons: Spurgeon and Henry. And her little guys are basically spitting images of their parents.

Full disclosure: I've been watching the Duggars since their 17 Kids & Counting days. And I have to say, it's been so surreal watching the older siblings get married and start families of their own. And on similar timelines as myself, too. Although I don't agree with most of their religious/political views, I hope the Duggars will allow viewers to follow along as they "count on" for years to come.