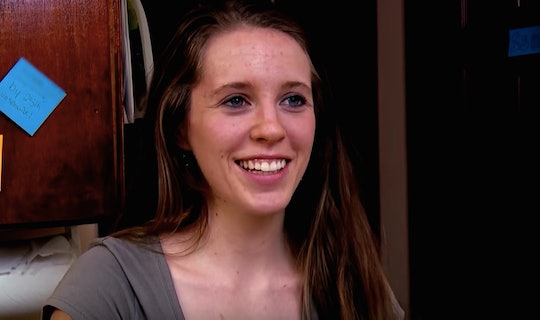 If there is one thing that the Duggars are known for it's the size of their ever-expanding family. With so many of the Duggar siblings growing families of their own, fans are almost always on baby watch. As they await confirmation that Joy-Anna Duggar has given birth and another pregnancy update from Jill Duggar, fans are also reacting to these Jill Duggar pregnancy theories that have recently started making the rounds. Jill hasn't chimed in on the subject yet, but that hasn't stopped the speculation from running rampant.

The 26-year-old is already the mom to two children — Israel David, who is 2, and Samuel, who was born in July 2017 — with her husband Derick Dillard. Although she seems more than happy with the size of her family right now, of course there's always the possibility of adding another. And considering what she's said in the past, it's very likely that she and Derick will add more to their brood as time goes on.

Needless to say, fans are eager for new baby news from their family and have taken their detective skills to the next level with these pregnancy theories.

The rumor mill first began churning on Feb. 17 when Jill's husband posted a photo to Instagram that appears to show prenatal vitamins in the background. He captioned the photo with the bible verse Proverbs 17:22:

I have a renewed appreciation for the reality of this verse after becoming a father. This little guy brings so much joy!

His joy over the journey of fatherhood, combined with the vitamins, proved to be too much for some of his followers to ignore.

One of his followers pointed out the vitamins and wrote, "Is Jill pregnant again or is she taking the prenatal vitamins because she's nursing?" Another pointed out that it could very well be the latter. "I take prenatals while nursing. Also if you read the bottle it says to take before, during, and after pregnancy," she wrote.

A quick Google search of the Garden of Life brand of prenatal vitamins that are shown in the photo reveals that they are, indeed, "specifically formulated to meet the unique needs of women during pre-conception, pregnancy, and lactation." If Jill is breastfeeding either 7-month-old Samuel or 2-year-old Israel, she could very well be on prenatals to help with lactation. Baby Center even recommends continuing to take prenatal vitamins while nursing to help "make sure you're getting essential vitamins and minerals" to provide for yourself and baby.

At just seven months postpartum, there are other plausible reasons for Jill to still be taking the supplement, though fans are hoping it means something else.

Along with the vitamins, Counting On fans are also looking at one of Jill's own Instagram posts as potential proof of a third baby on the way. She posted a photo on Wednesday of her and son Samuel with the caption:

The fact that she said "babies" plural while just holding one of her children had some wondering if the other child she was referencing is in her belly. "She said my babies... she’s only holding one so she’s probably pregnant with one also," one person wrote.

Her caption was, unfortunately, not the only reason why people are thinking that Jill may have one on the way. Some people believe that the minuscule amount of her midsection shows a "baby bump," with one person saying, "I think she’s pregnant too. #babies and also looks like a baby bump too." And another expressed similar sentiments. "Baby #3?" she wrote.

I'm sure that I don't need to tell you that postpartum bodies come in many shapes and sizes, but I will anyway. Some women's tummies retain a "bump" after they give birth and one of Jill's followers pointed out that as it has only been seven months since Samuel was born, she may well still have a bump from that pregnancy. "As a mom of 2, baby bumps stick around for awhile so be careful with assumptions," the follower commented. "It can be hurtful and discouraging when someone thinks you look pregnant when you’re not."

Piecing together pregnancy clues over social media has become something of a national obsession — just look at the months of sleuthing that surrounded Kylie Jenner's pregnancy — but without official confirmation or denial from the family, it all remains speculation. If Jill is, indeed, pregnant, I have no doubt that she will make the announcement in her own time.